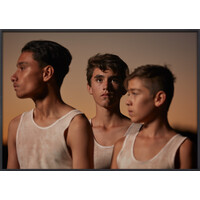 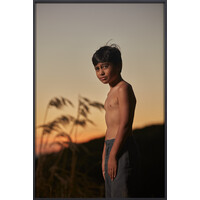 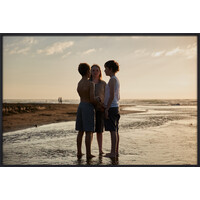 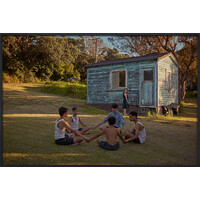 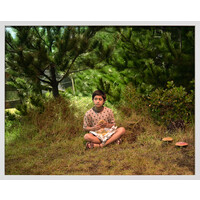 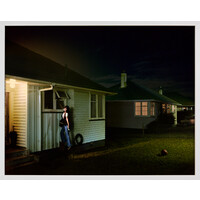 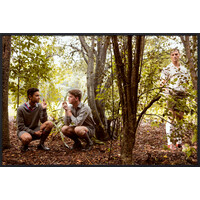 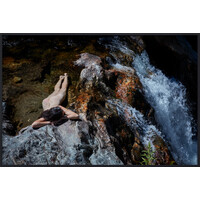 After spending fifteen years working as a fashion photographer in New York, Russ Flatt (Ngāti Kahungungu) states that it was in 2010 that he “started taking pictures that were for me and not for other people” (1). That series, Paper Planes, examining childhood, family, and memory, saw him accepted into the Masters programme at Auckland’s Elam School of Fine Arts.

Since then, Flatt has continued to use his photographic practice to examine the ways we construct our personal experiences of the past and present through recollection, and how these are framed within social and cultural contexts. Family histories, gender and sexual politics, the constraints and inequities of social norms are all to be found in Flatt’s tightly edited photographic series. The artist’s most recent body of work, Team of Five Million, peers beneath the feel-good factor of Jacinda Ardern’s quote. Flatt’s photographic tableaux examine the day-to-day reality of a country where embedded socio-cultural biases mean that some ‘team-members’ are treated quite differently than others.

In 2020, Russ Flatt was awarded the Paramount Award at the Wallace Art Awards for Kōruru (Knucklebones). An intimate portrait of a young Maori woman and boy, it is grounded in Flatt’s family history of whangai and resonates with a feeling of connection that goes beyond the here-and-now. This was not the first accolade the artist received through the Wallace Arts Trust; in 2015 Flatt took up a residency in Vermont, where he produced Take me to the River, a series looking at the way bodies are socially and legally regulated.

Russ Flatt draws upon skills of lighting, composition, and narrative arc developed over years and his art practice reflects the careful consideration of each and every element in the frame. It is the control and vision of the artist that creates photographs that feel poised on a knife’s edge.
1. Ashley Wallace, “Russ Flatt on dealing with trauma and grief through photography,” Mindfood, March 24, 2021