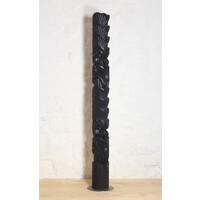 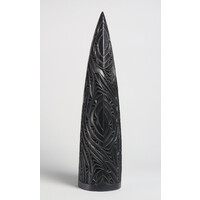 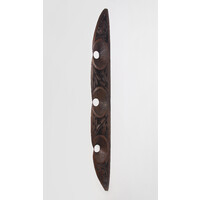 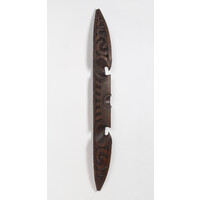 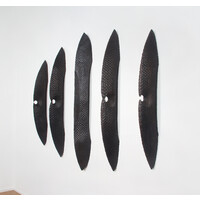 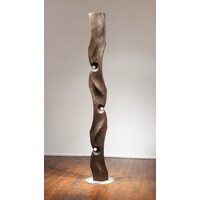 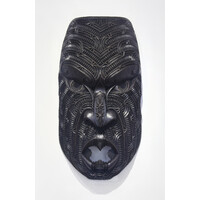 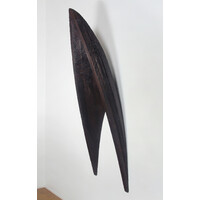 Drawing on his Ngāti Hako, Te Aupōuri, Ngāti Porou and Irish ancestries, Chris Bailey’s sculptures are physical and symbolic markers of place, identity, and history. Predominantly working in stone and wood, Bailey exploits the characteristics of each medium to their fullest; his wooden ‘pou’ reach skywards and rounded stone forms possess a weightiness that extends far beyond physical mass.

“I create each piece from a personal journey. The stones resonate. They hold their own energy when I'm working with them. The combination of energy and the land I'm working on fuels me and the end result does surprise me.” (1)

One of Bailey’s commissions, Pou Tu te Rangi (2011), stands in the Sanctuary Garden of Auckland’s Britomart Precinct. The seven pou represent a family and Bailey explores ideas of “te kotahitanga (being as one), te piritahi (coming together), and te mahi tahi (working as one).” (2)

Based on Waiheke Island, with an academic background in Māori Culture and Heritage, Bailey has worked as an artist for over 20 years and has exhibited both nationally and internationally. He has been awarded a number of Creative New Zealand grants and in 2010 was the subject of a documentary Chris Bailey – Ringa Whao, which looked at his journey to becoming a sculptor. Bailey has been recognised by the New Zealand Art Council for his stone work and as such granted Toi Iho status which formally recognises authentic Maori art of a high artistic quality. In 2009 he was one of a selection of designers and artists whose work was shown in the New Zealand Room at La Maddalena, the 53rd Venice Biennale. His work appears in many private and public collections, most notably the New Zealand Maritime Museum, Museum of New Zealand Te Papa Tongarewa and the New Zealand Arts Council.