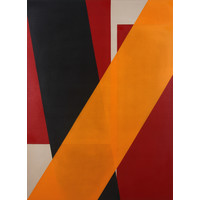 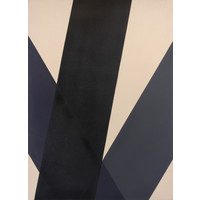 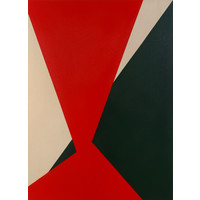 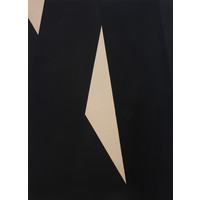 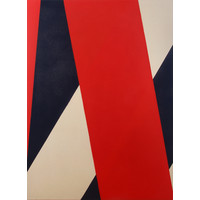 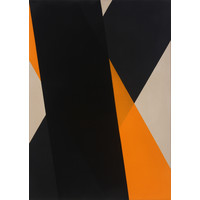 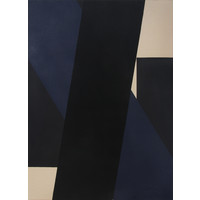 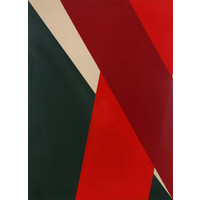 Leanne Morrison’s practice positions her firmly within the modernist tradition, but extends past this into a consideration of the painting as a material object in and of itself. Her process is focused upon the physical characteristics of paint and canvas, methods of application, the optical effects created by the interactions between colour. Her style is representational - but she is representing what art critic Clement Greenberg described as “the limitations that constitute the medium of painting - the flat surface, the shape of the support, the properties of the pigment” (1).

Morrison places wide bands and blocks of colour alongside and on top of one another to explore the way painted layers and colours respond to one another. The recessive and advancing properties of colour are utilised to establish areas of space behind or between the coloured sections of each painting. Of course, there is no ‘space’: the painting has neither a background nor a foreground and the illusions of depth and movement are purely functions of opticality.

In addition to this, Morrison exploits the expected physical boundaries of a painting. Her coloured forms extend around the corners of the two-dimensional surface and emphasise the materiality of the artwork - the stretched and folded canvas, the underlying supports, the solidity of its corners. Morrison highlights the fact that her artworks not only investigate colour, line, flatness, and paint but that the painted canvas also operates as a skin that is manipulated around its three-dimensional supports. She reveals the tension that exists between the painting as an object and the painting as a painted surface.

Leanne Morrison graduated in 2018 with a Master of Fine Arts from the Whitecliff College of Arts and Design. While still a student, her works were included in the curated exhibition Rematerialised at DEMO (Whitecliffe College of Art and Design). Art Critic John Hurrell noted how the startling precision and dramatic shapes of Morrison’s paintings coerced the viewer into wanting to discover what ‘lay beneath’ the thin layers of paint (2).