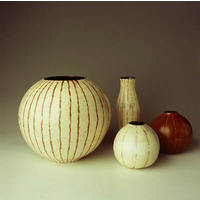 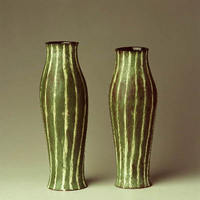 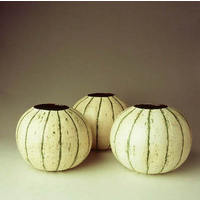 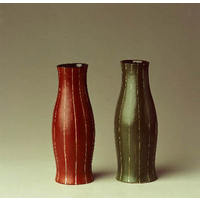 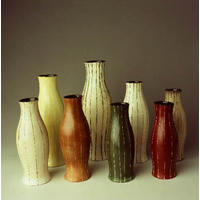 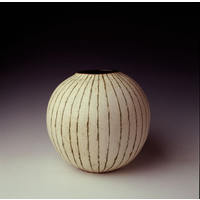 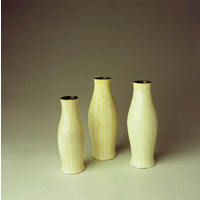 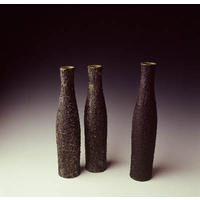 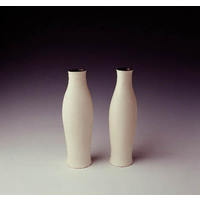 Katherine Smyth’s hand-built vessels and containers achieve the majesty of being – they attain the language of presence and more still, they become verbs and have personalities.

This hallmark characteristic is as rare as it is utterly remarkable.

How does this happen? Clues can be found in the under-stated and apparent, the obvious – the painterly consciousness, for example. But these are objects, aren’t they? They work in space, define their own shapes, and use the familiar techniques of repetition, appropriate texture, are painted with slip or have bubbly glaze, there is surface inscribing and naturalistic describing. And, it just has to be acknowledged, they are so relentlessly elegant, wonderfully simple, complete and refined. Yet, these “works seem to simultaneously function as discrete objects in their own right as well as collectively to form a three-dimensional still life.” (1)

Where then does the unmistakeable sense of the human body come from? How does this occur?

Jessica Reid wrote in the accompanying text for the splendid recent Survey Exhibition at Wellington City Gallery that “Smyth is capable of deftly putting her hand towards a range of techniques, forms and histories within ceramics. Each work contains a confident self-possession; they allude to their influences yet rise above being mere imitations.” (2)

Douglas Lloyd-Jenkins noted in an important essay in the Listener on Smyth’s work that the relationship between pottery and painting has come into prominence with debates and dialogues about collective presence and still-life arrangement now being more sophisticated, significant and fixed in the ceramic world than from its traditional source of painting. (3). Although there are significant exceptions to this – Jude Rae most particularly, for example – there can be no doubt that generally this is so, and in particular that Katherine Smyth is a leader in this field. It is intriguing to observe how (in a collective setting) Smyth’s works interface with the negative and surrounding space – which seems at times to hover, fluctuate, surrender and become subservient, secondary.
Smyth’s work resolutely references the real – the locally grown, the known - but establishes ambiguity along the way and so also becomes imagined. This attribute completes the process of her hand-built objects becoming art by attaining significance and metaphorical life. Smyth’s vessels, cylinders and containers are informed by the literacy of ceramic tradition but develop and exhibit consistent avenues of enquiry such as resolved experiments with glaze and form, exterior surface and organic shapes.