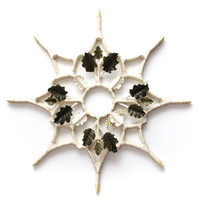 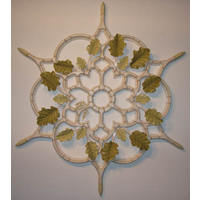 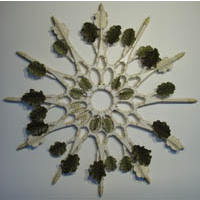 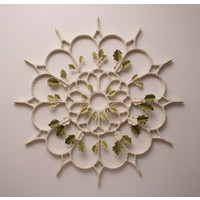 Main’s interest in and adaptive use of the visual language of the Gothic architectural style is without parallel in New Zealand sculptural practice. His melding of mediaeval architectural concerns of order, purpose and pattern with the flora of New Zealand bridges time and geography, and forges the culturally specific, emblematic narratives of his wall-mounted works. This combination of spiritual metaphors, design dialogues and explicit naturalism both reveals and celebrates.

His use of the rosette form (and by direct linkage the viewer’s associative memory of its meanings and implications) establishes the contemplative, emotional aspect of these works. This dualism of form and memory allows Main to combine mediaeval symbolism with his own philosophies about regeneration and the natural environment.

Main “has developed an effortless grasp of the third dimension. He is also an artist with a strong sense of the local … Main’s floral interpretation of the Gothic rose window is, therefore, not only a pretty conceit, but a historically valid one. The rose window represents the rosa mystica and the rosa mundi – it is the geometrical symbol (in the mediaeval sense) or facsimile of the harmonious spheres of the cosmos centred on God the Father, and in the mediaeval mind it was the symbol of Heaven. Dante in the Divine Comedy depicted Paradise as a vast blossoming rose.” (1)

“I like the idea that we can observe the medley of forms in a plant and select from that a few characteristics or expressive elements that will function as a stylistic motif. When this is taken into pattern, the result can function as a generalised symbol of nature. Traditionally in the decorative arts, laying plant motifs in a repeating pattern symbolises the regenerative quality of nature and embodies the sense of order that comes from the perception of pattern in our environment.” (2)

Main’s object-based practice is entrenched in structural and sculptural traditions. He uses illusionistic realism and decorative detail to establish authenticity, vary texture and augment belief. He has altered some key elements in his making process in this exhibition with the new development of impress clay moulds to achieve making efficiencies whilst retaining the textural and focal qualities only possible through hand-painting and surface build.