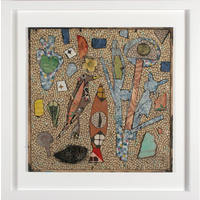 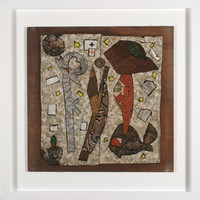 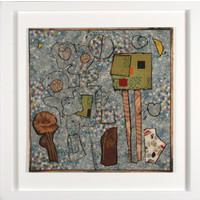 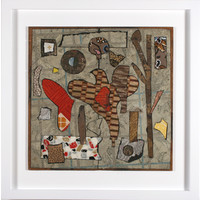 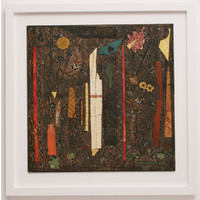 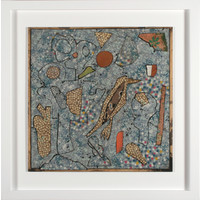 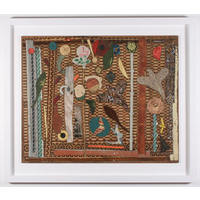 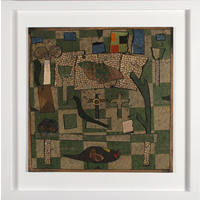 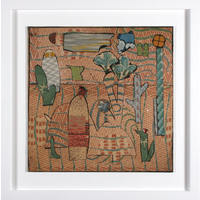 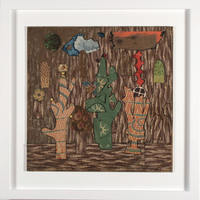 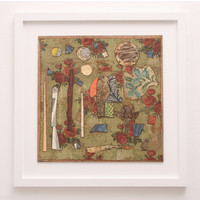 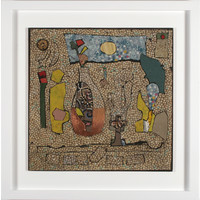 “Both humble and high-spirited, Simon Ogden’s arrangements, though at first glance appearing as stuck and still as figures in a carpet, carry a terrific promise of motion.

The cut-outs, dropped into place once, seem capable of being moved into different positions. What the artist has done this time with the material manages somehow to be both certain and temporary, one version of events—and ‘events’ seems right since the works have the feel of folk tales. Once upon a time, in a beautiful garden, lived a bird . . . In this way, the scenes escape the deathliness of tableaux and instead tremble with possibility. The flowers do seem to blossom, the birds to lift. What at first glance appears basically a decorative art, a world of designed surface—and the word ‘pretty’ comes easily here—now begins to feel promisingly narrative, as if each piece of lino were a character in a partially submerged story: the pretty surface has depths.

If the elegance of the arrested scene—bird in a tree—is what first takes us in, these works repay further consideration by encouraging us to imagine the scene changing: the bird will soon be gone, the light will alter. Storm Mexico is an image of upset; what the picture also conveys is the provisional nature of what we see—the storm will pass, and whether that means we get to go back into the beautiful garden or even into paradise (as one of the titles has it) or somewhere else entirely, is a matter for the unguessable future or the next instalment of the tale.

That beauty itself might be provisional and something we need to make and re-make in the face of vicissitude—that our lives are a little like lino even—is hardly a lesson of these extremely, excitingly, un-didactic works; nevertheless one feels less and less that these are nostalgic pieces and rather more that in their calmness and their gentle comedy they convey an involving urgency.”