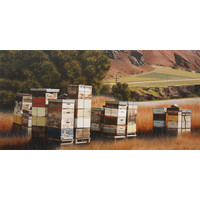 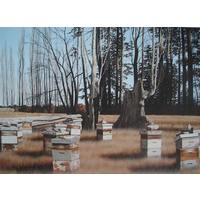 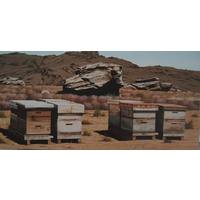 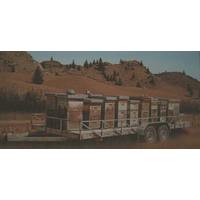 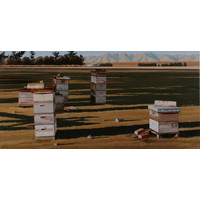 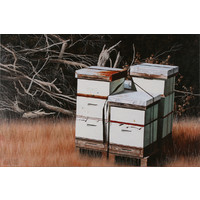 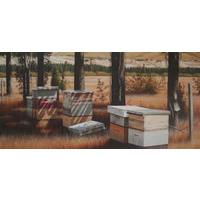 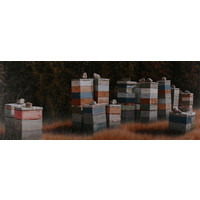 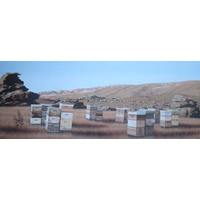 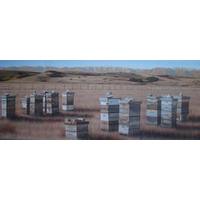 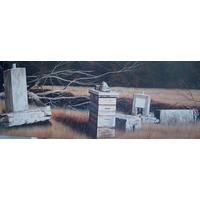 Michael Hight has established an outstanding and substantial body of work focused on the Central Otago landscape and the metaphor of the beehive. His paintings are remarkably accurate and imbued with the confidence of fully observed detail (Middlemarch, 2007).

Yet there is no such thing as a typical Hight painting – from work to work – he varies his line of sight considerably and the role played by the beehives alters from sculptural to compositional to textural and so on. Commonly the beehives occupy the foreground of the paintings but in Maniototo Plain (2007) we read centre, right then left before understanding they make up a circle, and dwarf the mountains behind. In Chard Farm (2007) the beehives are mounded up in the left corner but move away down the slope. In Bannockburn (2007) they are partially covered by the shadows of trees and the background has been segmented by the tree trunks, and the viewer feels protected, enclosed.

Waipiata (2007) is different, again – light is so low down that shadow has been stretched from side to side and its patterning tells not simply the time of day but the story of a season. Little Valley Road (2007) is a work held tight by contrast and contradiction – an alpine desert landscape, the misleading green health of wilding pines, beehives on a rusty trailer waiting to placed out or moved somewhere else.

In Butcher’s Gully (2007) and Idaburn (2007) Hight subtly reveals the palette of the landscape to be directly connected to the weathering process of the beehives that service the environment.

Hight’s concern with specifics, details and the identity of location are key elements in his paintings. These are delivered with the assurances of compelling painterly skill and equally evident virtuosity.