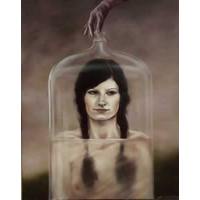 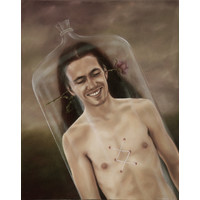 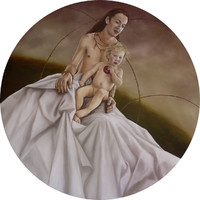 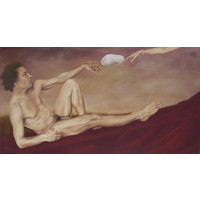 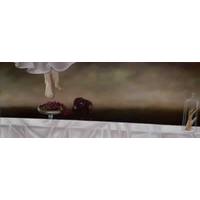 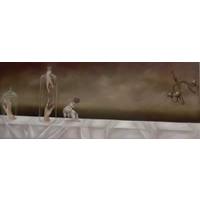 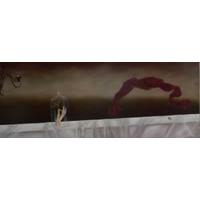 Anita DeSoto uses three colours (green, violet, sienna) with white, in a virtuoso display of painterly skill. She establishes narrative tableaux which present autobiographical elements, spirituality, symbolic objects and the theatre of the imagination in a parade of ceaseless endeavour, and of mythic moments trapped in time.

“She strives to instil an unfashionable purpose in her painting … to engage with the notion of beauty and purity of form, playing with the iconic religious martyrs … of Renaissance art.” (1)

Yet nothing is as it first seems in DeSoto’s paintings – there is a disjuncture between the real and the imagined, horror and beauty, pain and pleasure. There are “subtle deceptions of mood and meaning,” ambiguity rises up amongst the familiar and the domestic. Her blend of “portraiture with an array of symbolic references” allows innocence and knowledge, “corruption and sorrow” to coexist. Her subjects are both icons and individuals, whose vulnerabilities emerge through the “exploration of the emotional interplay of human relationship.” And there is reverence and humour, such as with the artist portraying herself as a child’s balloon in the magnificent painting Away, Away.

“In these works I explore human behaviour, emotion, desire, loss and love. God and goddess have been subverted or erased and the human condition is the focus. The archetypes depicted … throughout … art are my resource. In this body of work I have drawn from Michelangelo’s Adam, da Vinci’s Last Supper and Madonna and Child, iconography; also Cupid and Psyche… I have invented my own narratives, created my own myths that use the human figure to convey a kind of theatre. I paint my family and friends, casting them in roles as if in a drama, so they are not portraits exactly, although they are cast in roles relevant to their lives or my relationship with them… These works, while painted in traditional renaissance technique, are also surreal. The content is always dream-state and depicts the impossible…” (2)

In the major three-panel painting, Last Supper, DeSoto commands the viewer to experience the tilted presence of the table and upon this she has placed (as metaphorical objects) symbols of death and absence. These objects have been arranged in a discontinuous, solitary, manner (like the disjointedness of recall and memory) along the table length or suspended above. They are imperilled (by threatening to fall and slip away) and although time has been frozen there is an over-riding sense of imminence; that something significant is about to happen or perhaps already has occurred. In addition to this, the viewer’s eye travels from one object to the next before being paused by another of the painter’s purposes – that of spiritual contemplation.

The tondo Pater Del Rosa not only continues Desoto’s assured, confident exploration of that most difficult form but demonstrates conclusively that she now has a fully developed language of her own signs, symbols and methods. Witness the role performed by the rose canes in circling (and joining) father and son: then see his skin being torn by the thorns of solo parenthood.

Christian relics such as hands in jars are a recurrent motif of these paintings. In the bottle portraits Renee Away and Loves Limbus metaphors of entrapment, suspended love, and romantic reverie are explored – one threatens to be drowned by her own tears; the other is in a lover’s dream state, oblivious to his fate.