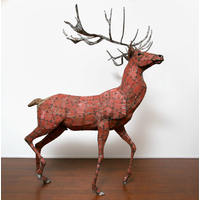 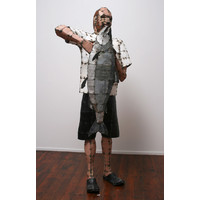 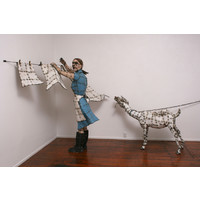 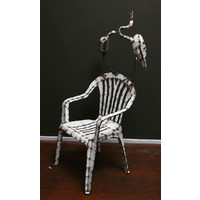 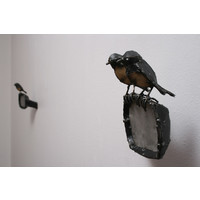 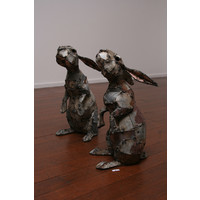 Hannah Kidd’s rapid development as a sculptor and the critical attention being accorded her work is evidenced with her inclusion in The New Dowse Shapeshifter 2008 and recent participation in the internationally important Sydney event, the 11th Sculpture by the Sea.

Andrew Paul Wood has observed that the “good-natured self-consciousness of subject and materials … elevates these sculptures … into something distinctive.” He remarks that the sculptures are “formally successful, the soldered-together patchwork of metal making interesting textures and geometries.” (1).

Kidd recycles corrugated iron and uses humour as a fundamental dramatic device whilst exploring elements of the human condition through the metaphor of animal form. However her works are more than mere observations of an animal’s physical presence, an event in progress or the harsh reality of rural circumstance but indisputably begin with this locus and particularity of language. On top of this dialogues of the absurd commence – trophies made of death, animals talking back.

Hannah Kidd demonstrates in this exhibition The Locals a remarkable breadth in her sculptural ability to represent human and animal forms accurately while also achieving the ‘completeness’ of individuality, psychological character and narrative purpose.