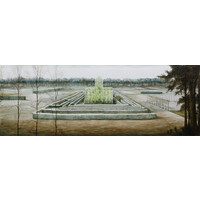 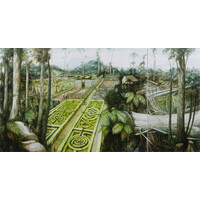 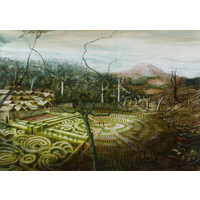 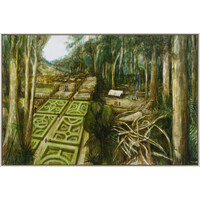 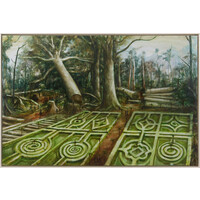 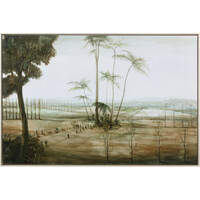 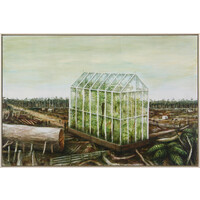 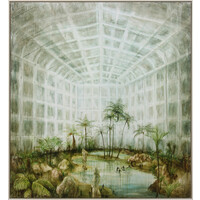 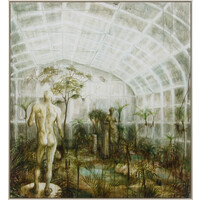 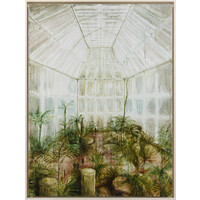 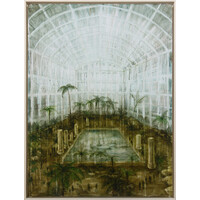 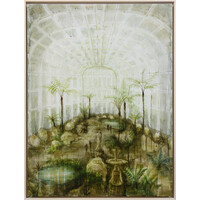 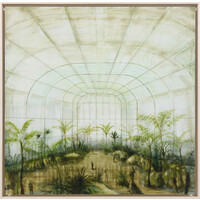 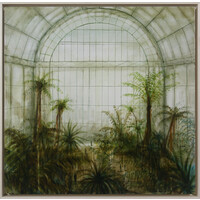 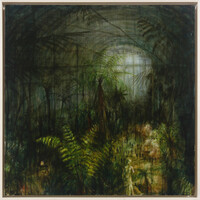 Utopiaroa captures the contradictions embedded within European concepts of the natural environment. Jenna Packer breaks down Romantic tropes of terrible beauty of the wild landscape; she presents sanctuaries, terrible in their own way, whose beauty is due to human dominion, control, and exploitation of nature.

When European colonisers arrived in Aotearoa, they did so in the name of progress. Pākehā settlers saw a land full of resources to be tamed and utilised: bush was felled for timber, wetlands were drained for pasture, the hills were mined for gold. At the same time, the Victorian sensibility for collecting and curating was finding expression in pteridomania, or “fern madness”, and greenhouses full of nurtured and coddled exotic flora were established in homes across Britain. Both impulses have their roots in a modern desire to corral and quantify the natural world.

In the eponymous work, Utopiaroa, European settler experiences of the environment are physically manifested in the straight lines of the surveyed road and water race that slices through the landscape. Curlicue hedge mazes and clipped topiary have no purpose other than the display of privilege and wealth. Both are at odds with the human scale of the gardens tended in common and the clustered village houses. The chaotic richness of the bush is being figuratively and literally cut down to size whilst ponga thrive against the odds - an ironic nod to the dissonant drives to extract economic benefit from nature on one hand and to preserve certain of its elements on the other.

Winter Garden tells the story of plantlife preserved within glass arks, whilst the surrounding lands are denuded and divided into economically productive parcels. The modern-day glasshouse developed from terraria designed around 1829 to protect fern collections from London’s smog; a well-known version of these was the “Wardian case”, visually referenced in Terrarium. It is telling that the architect of London’s famed Crystal Palace was a glasshouse designer, but that the building’s purpose was to showcase economic might of the Empire and the marvels of industrial inventions that were to revolutionise agriculture.

A suite of works in Utopiaroa reveals carefully tended garden scenes framed by soaring glass and steel architecture. Within controlled atmospheres, nature is instrumentalised to provide solace and respite for humankind. Under the guise of preservation, botanical examples are carefully curated to suit aesthetic impulses and are living reminders of the wonders of scientific progress. The filtered light that infuses the aptly named Elysian Pool reinforces the otherworldliness of an unnatural nature; the crowded darkness of Pteridomania however, hints at the wilderness lying just underneath the manicured surface. 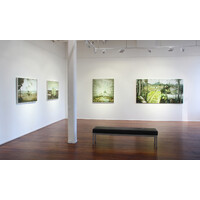 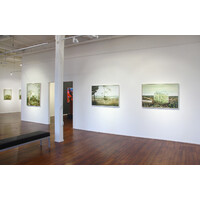 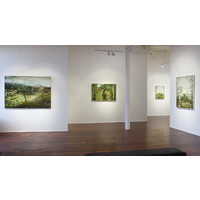 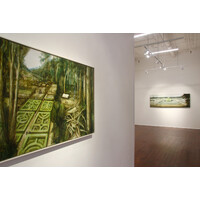 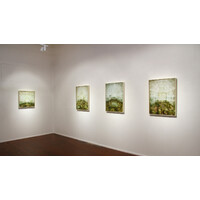 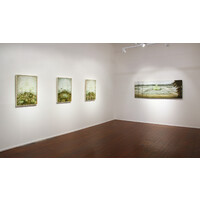 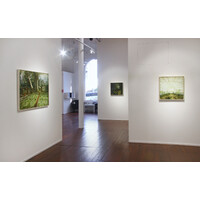 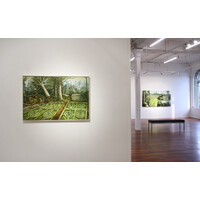