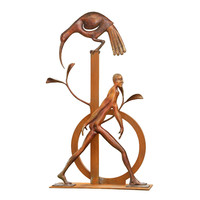 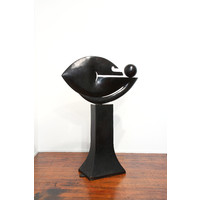 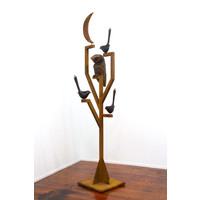 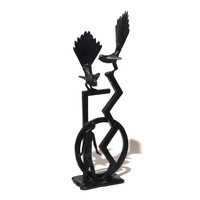 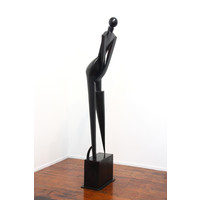 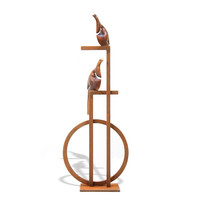 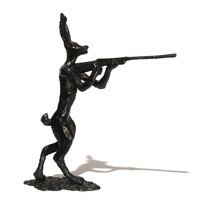 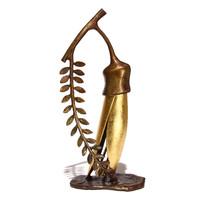 “My work is grounded in figuration, beginning with recognisable subjects and shapes, which I then abstract to a point where the form takes precedence. The play between positive and negative space is also important in my work.” (1)

One of New Zealand’s most acclaimed sculptors, Paul Dibble’s works range from small maquettes to large public pieces. Working primarily in bronze and grounded in a twentieth-century European sculptural tradition, his stylistic hallmarks include organic and sinuous curves, richly burnished patinas and a finely weighted sense of balance.

Often figurative in nature, Dibble captures his subjects in a single moment but they are not frozen in time. The forms possess a tangible sense of barely contained energy and the elegant lines of the sculpture enhance the feeling of movement as the viewer’s gaze is drawn up and along and over the surfaces. This liveliness implies an ongoing narrative with which the viewer can engage, rather than presenting a solitary instant that is disconnected from a past or a future.

Ideas spring from a range of sources: “The New Zealand vernacular, and folk art and writings, birds – it’s all in there.” (2) Birds, the huia in particular, have special significance for Dibble and can be seen in a number of his sculptures as a reflection on the natural environment, and especially on the damage inflicted upon it by the heavy hand of man.

One of Dibble’s most prominent works, the New Zealand Memorial Southern Stand, sits on a corner of London’s Hyde Park and was commissioned by New Zealand’s Ministry of Culture and Heritage. Unveiled in 2006, it is a collaborative work with architect John Hardwick-Smith (Athfield Architects) and references Maori pou, or markers, and iron fencing warratahs.

Born in 1943 in Thames and raised on a farm in Waitakaruru on the Hauraki Plains, Dibble graduated from Elam with Honours in 1967. Based in the Manawatu, he received the New Zealand Order of Merit in 2004, an Honorary Doctorate (the first in the visual arts) from Massey University in 2007 and an Honorary Fellowship from the Universal College of Learning (UCOL). (3) He has numerous public sculptures across the country and his works are also held in a number of private and public collections including The Museum of New Zealand Te Papa Tongarewa, the Dowse Art Museum, the University of Waikato and Massey University.