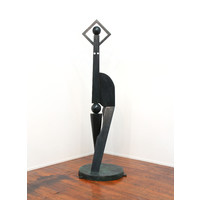 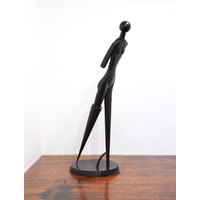 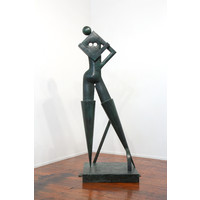 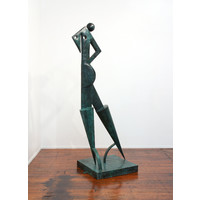 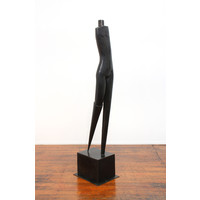 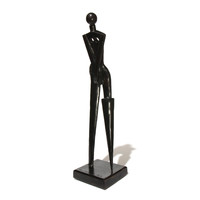 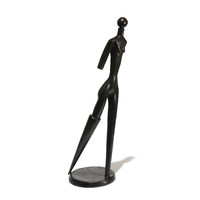 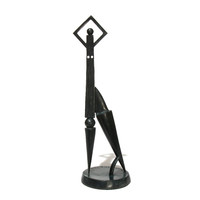 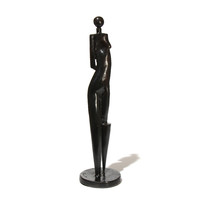 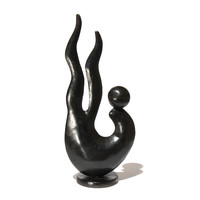 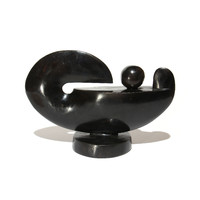 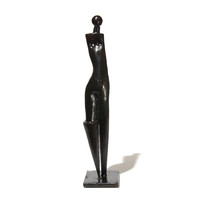 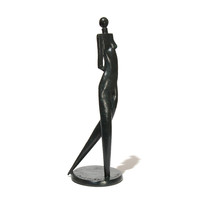 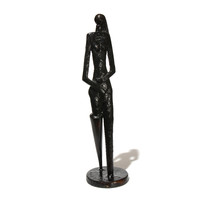 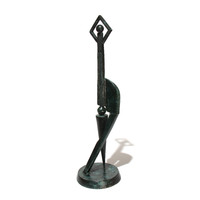 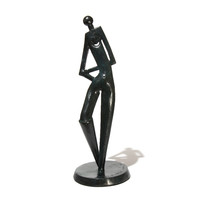 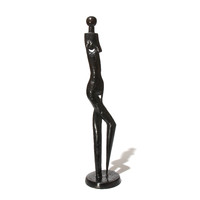 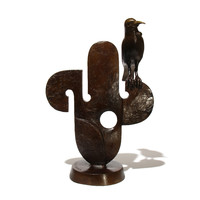 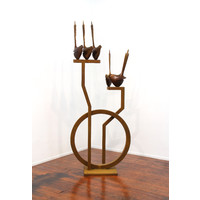 Paul Dibble’s geometric figures are all tall and female, playful and sensuous, as well as innovative juxtapositions of classical concerns and modernist traditions. They are imbued with individual personalities and seem caught mid-movement, contain quotes from art, utilise numerous geometric symbols and shapes (such as the tapering cone), and employ suggestion, gesture and humanistic virtues as integral elements that ultimately come to mark each work apart.

Moving Forward, Looking Back (2000) reveals the pose of a dancer captured in mid-movement. There are separate narratives built by the arms and legs. Positive and negative spaces are juxtaposed, lines and curves are exaggerated and emphasised. In this major work, Dibble is (as the title states) looking back to the classical traditions of the female nude but using an idiosyncratic visual language that pauses to acknowledge modernist sculpture (and in particular Archipenko’s cubist statues) whilst portraying the naked, exposed body in a combination of various geometric shapes. This dynamic, literal, evocative work is also noticeably sexually charged.

Putting Your Best Foot Forward (2015) is likewise filled with sensuous sensations and deliberate provocations. The pose is revealingly dramatic and assertive. He uses the geometry of line and the language of curve, as well as integral metaphors of implication and scale alteration. The nude strides forward, and therefore directly confronts and addresses the viewer outside its own space.

The central role of humour, satire and cultural stereotype in Dibble’s sculpture is well-established and unmistakable. In Into a Southerly (2015) he leans a classically inspired figure into the relentless wind. He directly addresses the uniquely New Zealand fascination with the weather as a recognisably cultural motif, utilising a conceptual pragmatism where everything else is stripped away. This work is delicate, with suggestive, soft volumes animating the figure (the belly, the bottom etc) and the angle of her lean completing the tale of the wind’s strength.

The Calm (2015) is the only figurative work without a small spherical head. The pose is certain and upright, the exquisite figure sits somewhere between adolescence and adulthood. What is Dibble speaking of here in its title? Is it ‘the calm’ before ‘the storms’ of adulthood, the arrival of sexual awareness?

The Second Daughter (1999), directly references Nabokov’s infamous character ‘Lolita’. Visual tensions abound – the pose is ambiguous, contrasts of sexual provocation and protective gestures are delivered simultaneously. The contrapposto stance of the figure is resolute and emphatic yet there is a softness and vulnerability that belies such assertions and confidence. This complex, layered, key work accurately portrays and delves into the vast and sharp contradictions of Lolita’s (assertive and timid) personality.

Dibble’s consistent use of symbol and metaphor to explore substantial environmental stewardship concern is clearly demonstrated in Flock (2015).

This substantial exhibition also contains a suite of smaller scale new geometric figures released in editions. Dibble uses gesture, movement, paraphrase and personality to deliver each work with uniquely individual emotional qualities. There are also two soft geometric forms edition works which address earlier concerns and directly reference the Polynesian cultural dialogues which have been so significant in his career. 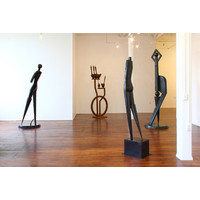 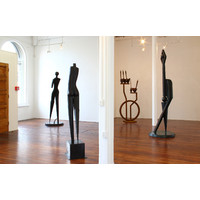 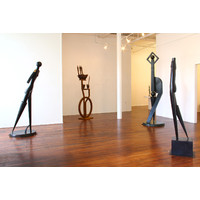 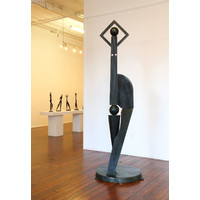 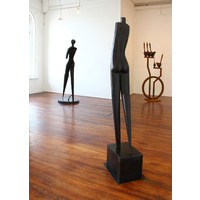 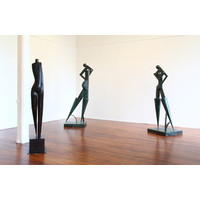 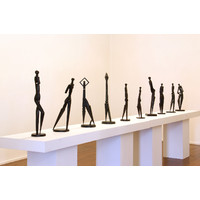 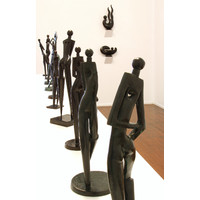