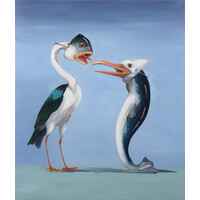 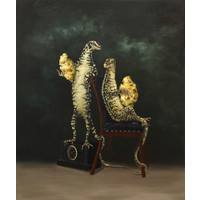 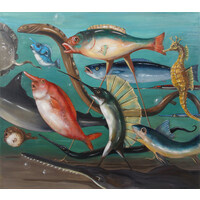 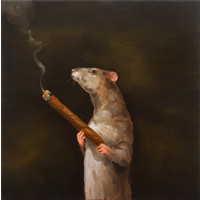 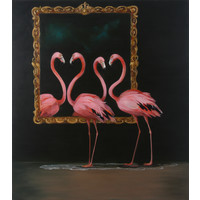 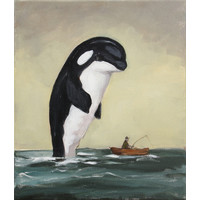 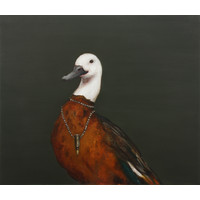 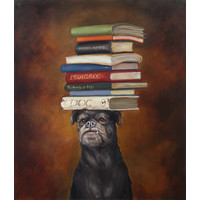 Joanna Braithwaite juxtaposes objects, animals, humans and insects onto lavishly painted surfaces in unexpected and imaginative ways. She characteristically works in series and her immediate environment often prompts her subject matter. “Braithwaite’s work always contains figurative and realist elements but seldom without a twist which wrenches the work away from simple realism towards the surreal.” (1) "Notions of progress and evolution, of sexual and natural selection, are seldom far from the surface of Braithwaite's paintings, whether they reference science lab or dog park.” (2) Her “fascination with the inversion of hierarchies and power structures and her preoccupation with testing the limits of what is considered human, raises wider issues of identity and authority. Her paintings prompt physical responses by means of psychological narratives, while projecting the spectator into realms where they must question the nature of their existence and their relationship with those around them. By these means her work also serves to make visible the processes by which power structures and hierarchies operate in contemporary society.” (3)

Braithwaite has long been concerned with the interrelationship between humans and animals. Of her ‘Hover’ series she states “I decided to push this idea of an imbalance between man and beast further by considering the attributes of each. What if the balance was altered, and what if one species acquired some attribute of the other? I chose to paint a series of works where the human form was completely covered in creatures that could fly.” (4) “The placement of humans and creatures in mid-air, ascending, floating, or falling, deliberately deprives the viewer of reference points.” (5)

Her works continue the use of both the symbolic and metaphoric and Braithwaite adds explicit anthropomorphic characteristics to her creatures and animals. These animals have become performers – “a trapped consciousness” is implied. (6)  Through the use of the formal strictures of traditional portrait painting, Braithwaite confers status on her rats, birds and rabbits: they are the ones “immortalised in oils.” Normal hierarchies of viewed and viewer, animal and human, the celebrated and the ordinary are turned upside down.

Braithwaite was born in Halifax, England in 1962 and came to New Zealand in 1965. She graduated with a Bachelor of Fine Arts from the University of Canterbury in 1985 and was awarded the Ethel Rose Overton Scholarship in 1983 and the Olivia Spencer Bower Foundation Art Award in 1990. She was awarded merit prizes in the 1997 and 1998 Visa Gold Art Awards. Since 1999 she has lived and worked in Sydney and has held many solo exhibitions in New Zealand and Australia. She has work in many private and public collections in New Zealand, Australia and London including the Robert McDougall Art Gallery, Brisbane Public Art Gallery and the Dunmoochin Foundation in Melbourne. In 2005, her work was the subject of a major survey exhibition under the curation of Justin Paton (Dunedin Public Art Gallery) and Felicity Milburn (Christchurch Art Gallery Te Puna O Waiwhetu). A survey catalogue of Wonderland – Joanna Braithwaite was published by Dunedin Public Art Gallery and Christchurch Art Gallery to accompany the survey exhibition.