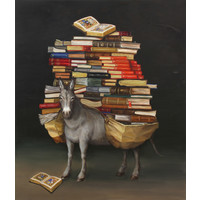 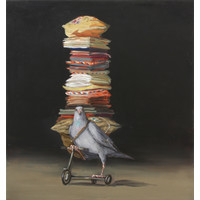 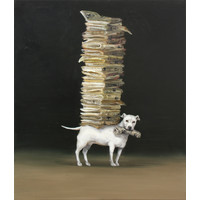 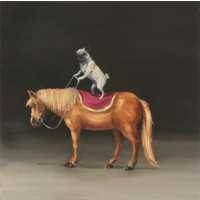 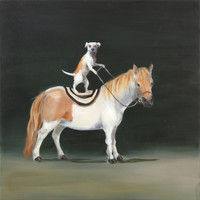 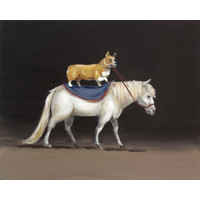 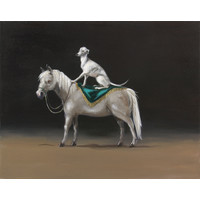 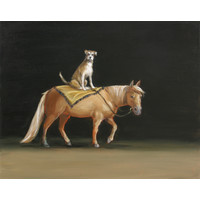 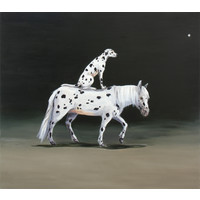 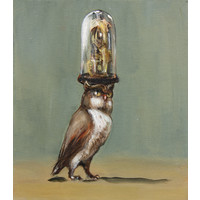 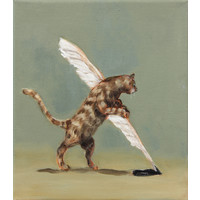 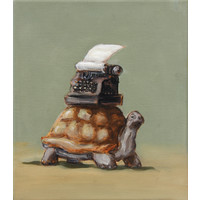 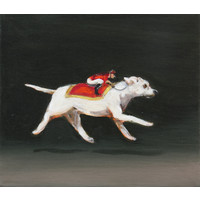 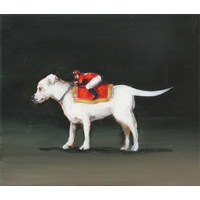 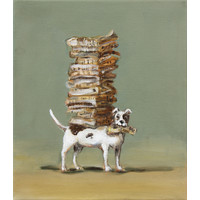 Joanna Braithwaite’s Dog and Pony Show draws on the traditions of touring circuses featuring performing animals that were common in the late nineteenth and early twentieth century. Traditional dog and pony shows were the ‘poor cousins’ of large circuses and rather than choosing to focus on the exotic lions, tigers and elephants that were the stars of elaborate affairs such as Barnum & Bailey or Ringling Bros., Braithwaite’s show features a mismatched coterie of dogs taking the reins of an equally mismatched set of ponies.

As with previous works, Braithwaite places her animal subjects front and centre. The carefully matched spots of dalmation and piebald in Dot Dash, and the coordinated patches of terrier and pony in Giddy Up #1 allow a sense of the absurd to weave through Braithwaite’s narrative. This is accompanied by an underlying sense of pathos, as the tawdry, tasseled covers worn by the animals only serve to emphasise the ordinariness of the scenario rather than turn them into creatures of wonder.

The dark background is a suitable backdrop for the anticipated action, and the indistinct moment where it meets the stage becomes the shadowy boundary between the glitz of show-time and the mundane of the everyday. Braithwaite’s careful suggestion of shadows beneath each pair indicates that the spotlight is on and the actors seem poised for their performances. Each of the characters is imbued with a sense of human emotion, but it is testament to Braithwaite’s skill that they remain resolutely animal. The combination of finely observed physical traits of a greyhound or a corgi is blended with the inference of a worried hesitancy or eagerness-to-please, thereby inviting the viewer to identify more closely with the characters.

Braithwaite poses a paradox for viewers in Dog and Pony Show. On one hand she considers the (ongoing) exploitation of animals for purposes of entertainment, an act in which ill-treatment and neglect is implicit; on the other hand, she has created a body of work which uses this very parameter to entertain the viewer – although ‘no animals were harmed in its production’. Braithwaite’s finely tuned ‘portraiture’ depicts much more than circus animals and the strength of the paintings lies in the undercurrents of meaning she uncovers and explores.

Accompanying Dog and Pony Show is a set of paintings that Braithwaite links to Bright Spark, her 2014 portrait of Australian author Colleen McCullough, which was a finalist in the prestigious Archibald Prize. Pondering the future of the printed word, Braithwaite portrays a brief history of writing, from the obsolescent quill and typewriter to the fast-disappearing hard-copy newspapers and posted letters. The humble donkey of The Good Book bears up under the weight of illuminated manuscripts; once the repositories of all knowledge, they are now piled into a couple of sacks. Time Wise recalls Minerva’s owl*; the carriage clock it bears is yet another victim of the information age.

* Minerva, the Roman goddess of wisdom and poetry, was often accompanied by an owl, the symbol of wisdom. Her earlier Greek counterpart is Pallas Athena, who was also thought to take an owl’s form.