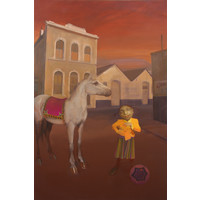 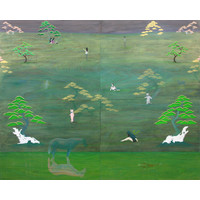 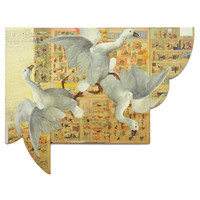 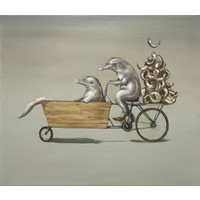 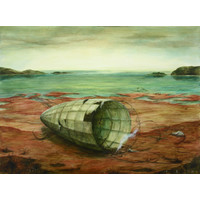 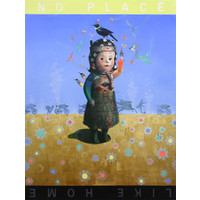 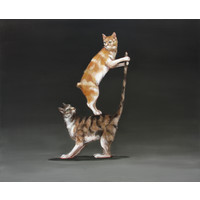 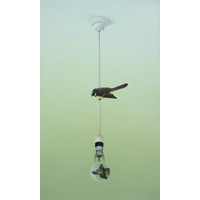 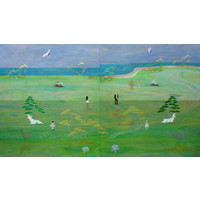 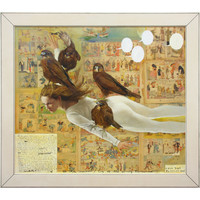 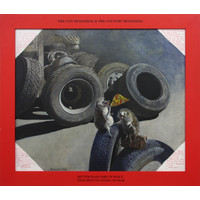 Ray Ching The City Hedgehog and the Country Hedgehog (2008) 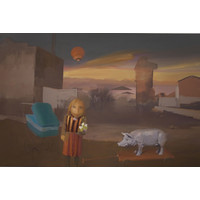 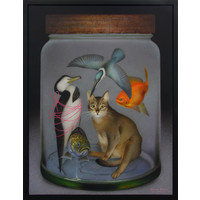 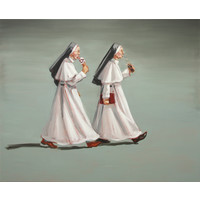 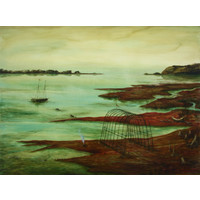 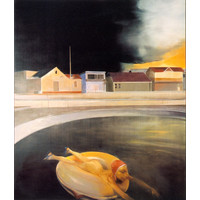 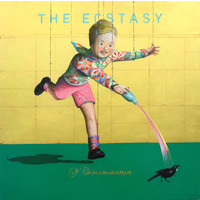 Simon Clark The Ecstasy of Communication (2011) 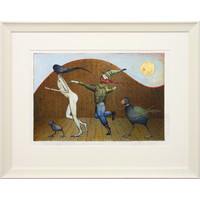 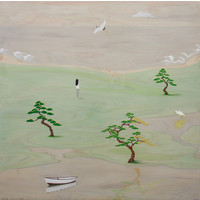 Marc Blake Everything I Can Do to Remember (2011) 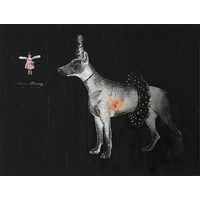 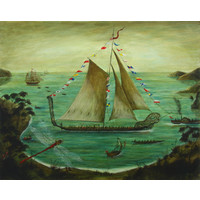 Growing out of the anarchy of Dadaism, the original Surrealists (Picabia, Breton, Duchamp, Chirico, amongst others), saw their movement as a philosophy of social and moral revolution where “the dream is omnipotent.” (1) In his 1924 publication Surrealist Manifesto, Andre Breton states that Surrealism expresses “the actual functioning of thought… in the absence of any control exercised by reason, exempt from any aesthetic or moral concern.” (2) How do the artists chosen for this exhibition – Marc Blake, Joanna Braithwaite, Ray Ching, Simon Clark, Jenna Packer, Paul Martinson, Gary Waldrom – fit into this idea of the Surreal?

Simon Clark’s No Place Like Home and Joanna Braithwaite’s Sea Travel both defy the constraints of a rational world, instead depicting places where fish do indeed require bicycles. Braithwaite’s bicycling fish are lined up with other creatures of invention: the Frosty Boy, a Mobil Oil Pegasus, the bird-chaser from Cerebos salt, and, centre stage, an unnerving doll in quasi-Maori dress, hand raised in greeting. If this peculiar world is home, there is indeed no place like it. Clark’s parade of disjointed characters is dreamlike: random elements combine to create an irrational whole, certainly depicting the “play of thought” advocated by Breton.

Marc Blake says of his work that “it can feel like I'm trapped or hemmed in somehow, and I have to wait until the right idea comes and suggests a way forward” (3) – this idea of the subconscious subverting the rational hints at the ‘automatic drawing’ practiced by both the Dadaists and the Surrealists. A raft of (seemingly) disconnected dream-like images inhabits the works of Marc Blake. Realist images of children, schoolgirls and old men are belied by the “immense amount of seeming contradiction”(4) in Blake’s work. Shown in a flattened, unreal perspective, and accompanied by stylised trees and ghostly creatures, his characters tote machine guns, wear gas masks and die in their suits as costumed children pass by (Everything I’ve Ever Known) and submarines breach an unnamed sea.

The ‘facts’ of place, time and history are also undermined in the paintings of Jenna Packer and Gary Waldrom. Packer’s delicate brushwork and muted hues bring to mind 19th century depictions of New Zealand settlement, at first glance comfortingly familiar. Upon closer examination however, it becomes clear that Packer’s story-telling has its roots in an alternative reality. The Camp reveals a desolate harbourscape where settlers seek shelter in the decrepit hulk of a zeppelin and other works feature fantastical waka-forms bedecked with bunting whilst giant dragonflies flit through sepia-toned skies.

Set against burnt-orange hills and a glowing sky, outsized, grinning faces couple with the disparate elements of an eyepatch, conductor’s cap and bare breasts in Gary Waldrom’s Sundance Sisters. The forthright gaze of the sisters is disconcertingly direct, they stare out of a twilight world, betwixt and between the boundaries of everyday life. Here and there, now and then – these rational parameters are concealed beneath the saturated jewel-tones of Waldrom’s canvases as he juxtaposes “two more or less distant realities”(5), something Breton believes essential to create an image of “emotional power and reality.” (6)

Breton writes of fairy tales, as a “fabric of adorable improbabilities” (7) that needs to be tweaked for adult consumption; he would undoubtedly find that artists Ray Ching and Paul Martinson are skilled exponents of this. Their exquisitely painted pictures possess the very “fear, attraction of the unusual, chance, the taste for things extravagant” (8) that adult fables need. Ching’s works are fabulous in the original sense of the word ie: fable-like. Pelorus Jack and the Monkey and The City Hedgehog and the Country Hedgehog are Ching’s take on Aesop, complete with moral lessons. Ching’s juxtaposition of incongruous stylistic devices such as expository text, comic book imagery and stunningly realist portraiture in works such as Lists/Stratocumulous Goose tell stories which are multi-layered and complex, their meanings hidden.

Paul Martinson is open about his work’s surrealist undertones, believing that “to draw spontaneously without conscious reference to normality, morality and social taboos … is an attempt to allow a ‘free flow’ of imagery and ideas as a painter.” (9) This ‘free flow’ permits him to create spaces where fish swim in lightbulbs and birds sleep in jumbled piles. The juxtaposition of the rational and the irrational is a powerful tool and the viewer has no choice but to examine the relationships between what is ‘real’ and what is not. Martinson’s paintings, with their delicate colour washes and meticulous detailing, are like the mirror in Alice Through The Looking Glass – reflecting not just what is visible, but what is not.

Breton’s Surrealist Manifesto was written at a time of massive social upheaval: post-World War I horror, new political and social structures rising in Europe, art that turned traditional 19th century Academy traditions on their heads. He intended it as a call to further social revolution, a new way of thinking for a new world order. We see now that, although the revolutionary zeal may be dimmed, artists today are still concerned with the ‘unsparing quality’ of the imagination Breton espouses. He would wholeheartedly approve of the ways in which our artists ‘refuse to accept defeat, set off from whatever point they choose, along any other path save a reasonable one, and arrive where they can.” (10)