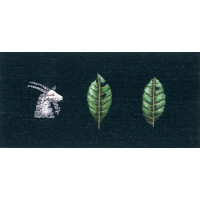 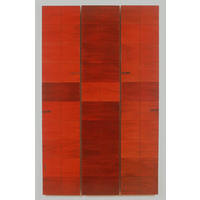 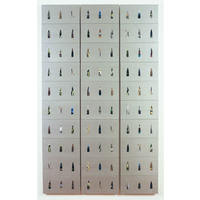 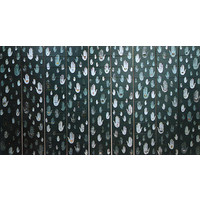 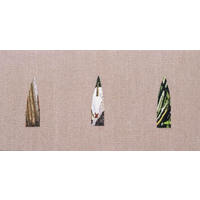 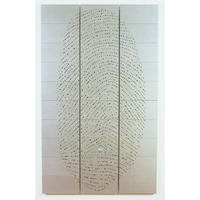 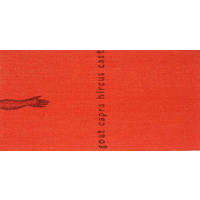 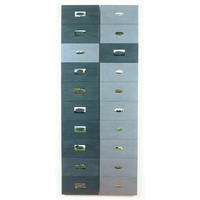 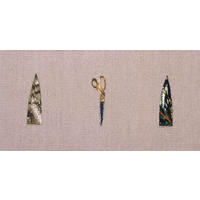 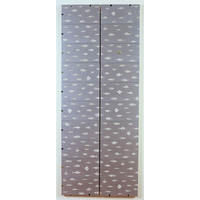 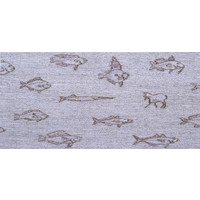 This is the final venue in Kate Wells' touring exhibition The Hunt. The exhibition is a series of large mural ‘designs for tapestries’, in the form of découpage assemblages on board. Accompanying the painted and varnished panels are a collection of small, intimate works executed in woven tapestry. These framed ‘relic’ pieces depict details of the large designs.

While the works comprising The Hunt reference allegorical medieval hunting tapestries, the stories, images and themes are inspired by our place in the South Pacific at the beginning of the 21st century.

Focusing on a collection of New Zealand’s offshore islands from the Three Kings Islands, Tiritiri Matangi and Goat Island, to the Quarantine Islands dotted inside city harbours, to Ulva and Stewart Island in the south, The Hunt explores issues of extinction, isolation, illusion, ambivalence and perception. At times quirky, others quietly provocative, the works defy easy categorisation and they straddle the boundaries between fine art, design and applied art.

The first scene of The Hunt opens on the Three Kings Islands, so named by Abel Tasman on the eve of the Epiphany in 1643. Here, under the title Propagation, the goat is juxtaposed with a botanical sample of Tecomanthe speciosa, three wooden Kings from the Lewis Chess set and various references to the sea creatures that drift into the area and sometimes wash up on the shore. The implied collision between these elements – native species, those introduced by accident or design and the ‘owner’ of the islands (the Crown) – speaks of the shifting values that have characterised the islands’ history.

In the second panel of the 15th century Unicorn Tapestries, the unicorn dips its horn into a stream to cleanse the water of poison for the other animals. The equivalent mural in the Hunt cycle is entitled Keepers & Watchers and features all 29 fish species found in the Leigh Marine Reserve in the waters off Goat Island. As if to imply the scientific monitoring and species preservation that underpin the Reserve the fish, drawn in ink, have been overprinted with pages from the Pears Cyclopaedia and the Chronicles of the Old Testament.

The third panel, Realty, which considers the effect of the recent property boom on previously unspoilt areas of natural beauty and environmental significance. Images based on photographs taken on the open sanctuary island of Tiritiri Matangi are pock-marked with holes and real estate slogans, suggesting that the buying up of nearby land is as potentially destructive as the animal predators the Department of Conservation works to eradicate. The fourth panel in the Unicorn Tapestries is perhaps the most troubling. Surrounded by hunters and their dogs, the unicorn tries desperately to defend itself. The situation appears hopeless, yet the creature cannot be subdued. Wells’s response, Tide, is a pitched battle, fought on the shore. Reflecting the current political debate over ownership of the foreshore and seabed, it is an endless game of ‘paper, scissors, rock’, in which each round cancels out the one before and no winner can be declared.

Sanctuary,, the fifth panel in The Hunt, is equally enigmatic. As the lines of the artist’s fingerprint are revealed as a complex maze, built from fragments of imagery from Ulva island, including wekas, robins, tethered goats and wolves (ulfr in Old Norse). At the centre of the work is a small white dingy, moored at the Ulva Island jetty – a means of entry and escape.

The sixth mural, Cast, relates to four of New Zealand’s Quarantine islands; Quail, Motuihe, Somes and St Martin’s. The names of introduced diseases and life-forms (some welcome, others branded as pests) are etched into three separate panels, reflecting the history of these islands as places on which to isolate the unwanted and introduce the desirable.

The seventh (the last) and largest work, On a Limb, focuses on Rakiura/Stewart Island. Isolated, yet increasingly popular, the island is an example of the tension that can arise between the desire for progress and the responsibility to preserve. A wall of hands and leaves, each palm holding a glimpse of one aspect of the island, symbolises the precarious juggling act of balancing nature within such a unique environment.

With this explorative new body of work, Kate Wells presents an engaging mix of historical and natural references combined with domestic and ‘feral’ motifs made up from the mixed media elements of drawing, photography, painting and computer technology set in juxtaposition with the ancient art of woven tapestry.