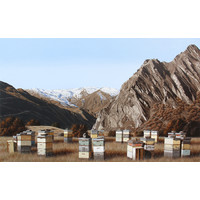 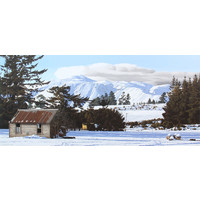 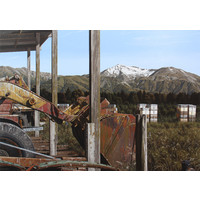 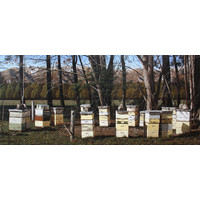 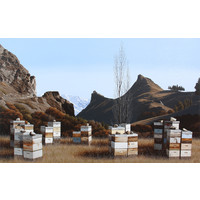 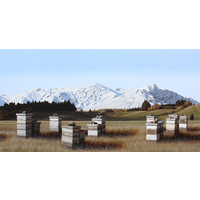 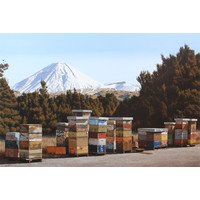 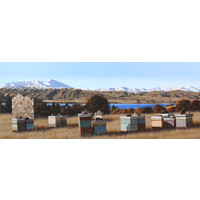 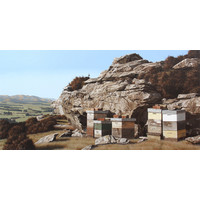 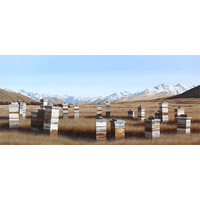 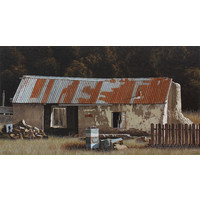 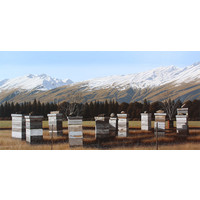 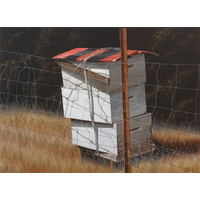 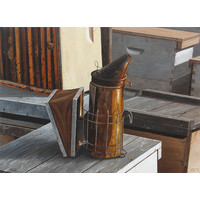 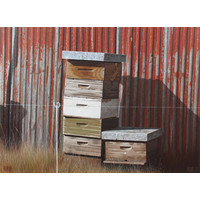 Michael Hight has achieved with his beehive series of paintings something that is profoundly momentous – he has deeply informed and changed the way New Zealanders look at their landscape. He has revealed that beehives are everywhere and in that process shown us how to read the associated landscape in its details, while building powerful visual metaphors of contrast, industry, the on-going seasons and how we then use (and misuse) our environments.

Mt Hutt Station (2014) is a compositionally ambitious, brilliantly delivered painting composed of repeated sharp lines and geometric elements. We are shown parts of at-rest rusting buckets and the extended arms of machinery, stacked suspension springs, portions of seemingly abandoned equipment or unused vehicles. The buckets dominate almost three-quarters of the foreground, with the shed angling back and narrowing away. Weeds and grass heads appear in massed profusion, rendered with remarkable, individual attention. Our eyes then become drawn to the beehive stacks – some clearly seen, others somewhat obscured – that divide the painting horizontally. There is another horizontal element of weeds just behind the hives and then much further back again a dense line of trees. Is that a native remnant or a plantation, awaiting harvest for the farmer’s superannuation? Above, in the barren alpine background, Mt Hutt skifield slowly declares itself.

Haldon Station (2013) is a tour de force. Hight’s mastery of light and dark, his understanding of the fluctuations between these as they occur out in the landscape, animate this wonderful work in both subtle and very dramatic ways. The beehives are slightly forward of the eucalypts, sitting out so as to be kissed by side light in stark and exhilarating contrast to the contained, protective spaces under the trees. Behind this, our eyes cross a farm paddock to a soft tube-like formation of fecund willow trees that travel from edge to edge. These further the key role of contrast with that of the barren, scree-shingle, snow-smattered alps sitting back behind.

Ngauruhoe (2014) and Fighting Hill: Rakaia Gorge (2014), although significantly different works, both structurally and geographically, are united in the fundamental role performed by snow. We see landscapes transformed, witness the stunning, revelatory clarity of all that.

In Towards Erewhon (2014) and Lake Aviemore (2014) the shadows present lead the eye about. Distance, absence and the inexorable progress of time become subjects.

Chard Road (2014) and Nevis Bluff (2014) are geographically linked. The beehives locate the environment but it is the schist rock landscape protruding into the sky which becomes the dominant narrative.

Hight’s virtuoso, authoritative accuracy is likewise revealed again in Macraes Road (2014) where a small suite of hives is tucked into the Maniototo rock face.