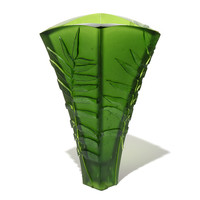 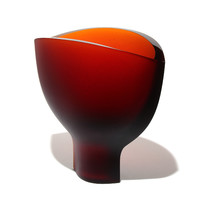 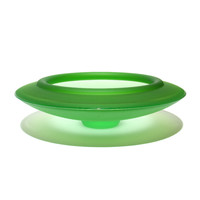 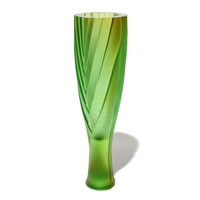 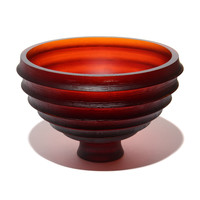 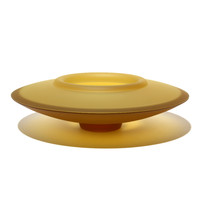 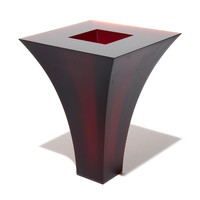 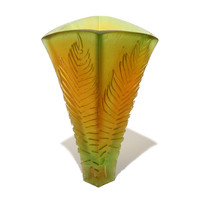 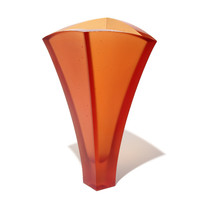 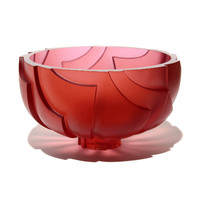 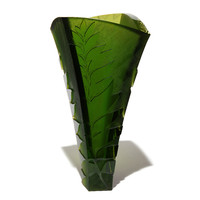 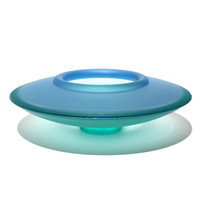 Acknowledged as one of the great glass artists of the world, Ann Robinson’s critical acclaim and prominence has been as much due to her ceaseless enquiry of form and materials as it has been her forging the symbolic and metaphorical language of her work in environmental concern, directly informed by the native flora and fauna of NZ.

Earth and Sky contains two major new bodies of work, new forms and techniques. It is an exhibition of considerable significance.

The Unite Series is a triumphant declaration of imperious design and supremacy of form. The top and bottom of each work have been cast separately and then joined together. As a direct consequence of this new technique Robinson has been able to explore and harness the role of the enclosed returning space and surfaces in ways never before possible.

Unite Series #2 features two distinctly different colours – pale aqua and lagoon green – separated by a clear glass insert. This extraordinary, very beautiful bowl, with a narrow outer lip and a rim foot, has a soft sensuous presence where the colours seemingly blur in space, as if hovering just beyond the surface.

Unite Series #4 features two chromatically linked colours – pale lime and pale jade. Interposed between is a rolled rim insert of clear glass, the slightly proud edge of which glistens and shines. There are four tonally different banded circles moving from the centre outward. Optical rhythms are built by the differing glass mass. In some viewing positions, a constituent yellow appears as a thin circle line at the juncture of the altering densities.

Unite Series #5 also combines two linked colours – citrine and chardonnay. The base is rich, strongly suggestive of soil or clay pigment. The work is noticeably more grounded by this but the top is also markedly different, somewhat drier in character. There is an ambiguous role performed by light in these colours – seemingly trapped and contained but sharply defined and illuminating from within.

Fern Vase #3 has distinctly different sides. The surface of each leaf has been brightly polished, the form abstracted and raised above the combed surface of the vase. The result is remarkable – spatial depth is suggested through the leaves but denied elsewhere by the vase itself.

Fern Vase (Spore) also dark olive green is assertively naturalistic with the polished fern leaves presented as a branch raised off the surface and rising up the slowly flaring form of the vase.

The pale yellow and pale green Fern Vase (Capense) has been completely acid-etched and as a result light is trapped inside the vase by the seemingly dulled surface. This fine figurative work is strongly suggestive of the modulating light glimpsed in a garden and the complex sensations experienced in the light at the bush edge.

The classic Robinson Ice Bowl #93 features for the first time the soft delicacies of saffire rose, a recessive, complex colour that seems to flux and wane.

This important exhibition also includes a superb semillon Curved Vase, two signature works - the replete, pale lime and yellow Flax Vase #10 and the resolute yellow amber Landscape Bowl – and is completed with a rich dark red Geometric Vase. This is an exceptional expressive work that builds a powerful sensation of infinity, where the role of glass mass has been elevated and determines what we see and how we see it.