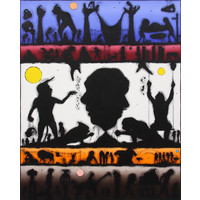 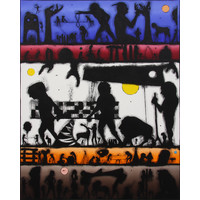 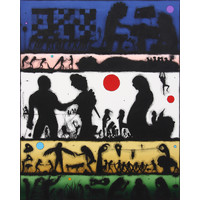 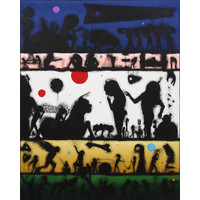 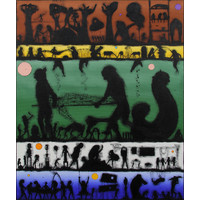 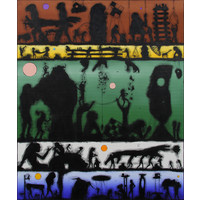 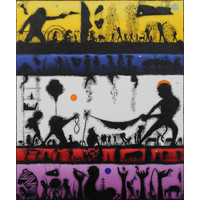 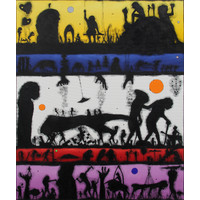 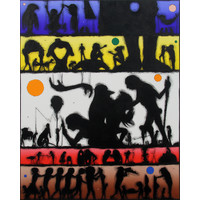 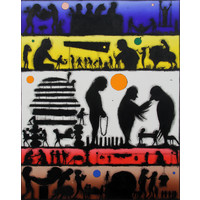 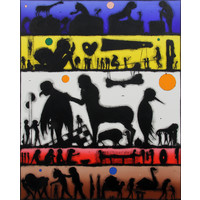 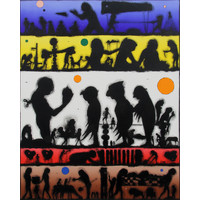 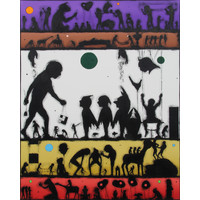 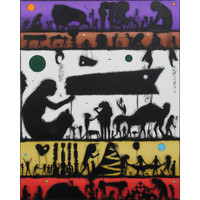 Drawing together threads from such disparate sources as Stone-Age rock art, classical Greek vase painting, Egyptian hieroglyphs, and Samoan siapo cloth, Andy Leleisi’uao speaks with a distinctive visual language. The layered worlds of Choirs of Lupotea suggest multiple mythologies at the same time as depicting a cohesive community, defined by its own rules of behaviour.

More akin to a hive than a hierarchy, the beings in Leleisi’uao’s paintings are engaged in collaborative activities “with an inherent consciousness of peace, respect and understanding”. (1) The complex societies of varied creatures perform their tasks with deliberation and it is this purposeful, mutual interaction that Leleisi’uao wishes to emphasise. The objectives of their endeavour remain unidentified: it is the means, rather than the end, that is of importance.

Flying creatures are recurring motifs in Leleisi’uao’s works; in previous works small beings and dark angels have leapt and soared across the canvas but this joyful sense of flight is not seen in the Choirs of Lupotea paintings. Suggesting alternative tellings of the story of the man who flew too close to the sun, winged, Icarus-like figures are central to the Choirs of Etropedia series. Being comforted and comforting in turn, the grounded bird-people are welcomed into their community, wings intact, as multiple suns glow above them.

Just as the jewel-like colours used by Leleisi’uao work together to create a harmonious whole, so too do the geometric forms of tangram pieces and Rubik’s cubes that appear in this suite of works. On one level they work as part of the physical architecture of the painted world, on another they symbolise a unity created from many parts. Silhouetted individuals wend their way through Andy Leleisi’uao’s painted hands, bones and faces, their black uniformity hinting at their shared narratives, histories and futures.