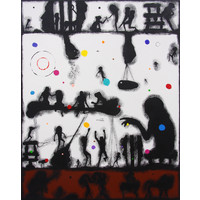 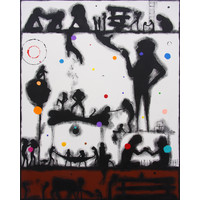 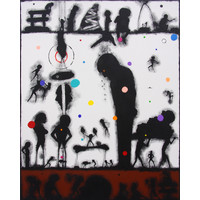 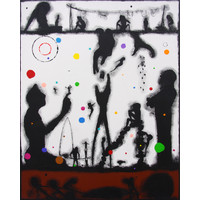 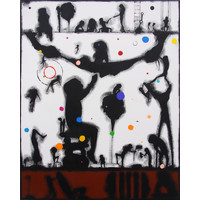 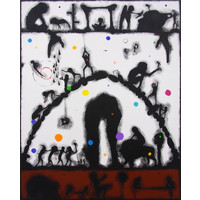 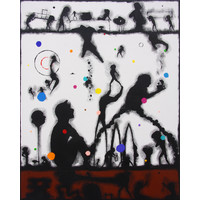 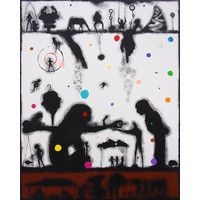 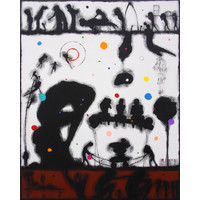 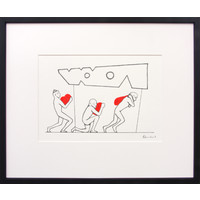 Polyneitus Spring is a series of tales told in Andy Leleisi’uao’s distinctive visual language. Reminiscent of pre-literate civilisations that used glyphs and pictograms to portray their stories, Leleisi’uao creates a powerful and complex narrative stream for his own invented world.

Motifs of hands, bones and profiled faces are common threads that have run through Leleisi’uao’s oeuvre over the last 4-5 years. The recognisable, human nature of these motifs evokes a sense of community with his painted beings, who toil and play and live as we do. The repetition of the images over time contributes to the feeling of a chronological continuum within his works – layers of histories built upon one another, speaking of universal struggle and endeavour.

The ‘helping hands’ in Polyneitus Spring Part XIII (2012) dispense blessings from on high, while the large figures below also seem to perform their own benedictions over a tiny entrapped individual. Are they rulers or gods or giants? The three central figures sit companionably, watching on from their bone-perch and other individuals continue with their allotted tasks, linked together in a mysterious common purpose.

Leleisi’uao’s use of black for his beings concentrates the gaze on their actions and the energy they possess; far from mindless toil, they move with volition to achieve a communal goal. The tiny beings floating and flying amongst rainbow spots further emphasise this energy. In the earth below lie unformed creatures whose stories are yet to be told and they remain dormant – for now.

On one level, the division of the canvas into three sections is a clear allusion to mythological tropes of the heavens, the world of men and the underworld, but Andy Leleisi’uao goes further than this by creating a world that ‘scrutinizes the humanscape of individuality in society through a stream of enigmatic imagery. It is Bosch's Garden of Earthly Delights transplanted.’(1) His vision resonates with us by tapping into our own humanity and the histories that underlie it.