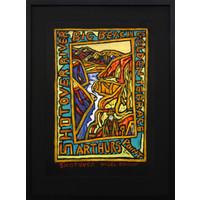 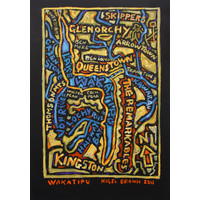 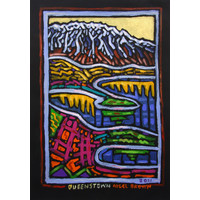 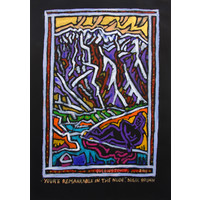 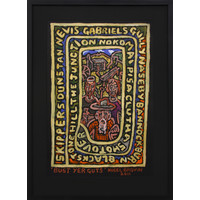 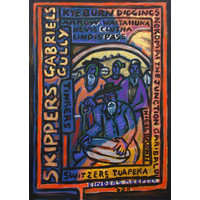 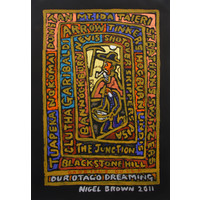 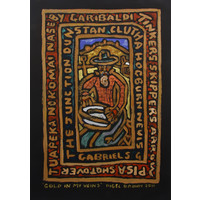 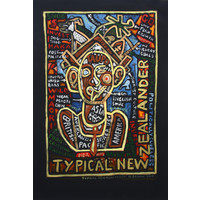 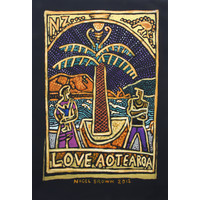 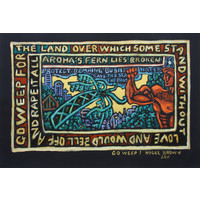 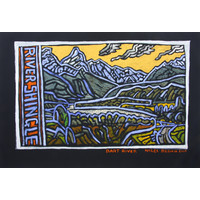 Nigel Brown has had a long term, multi-faceted relationship with the Queenstown area. His grandfather on the Brown side was the first child born on the Kyeburn diggings. Relatives such as Moses Brown and John Brown were gold miners who sluiced extensively. His grandparents ran the Lowburn Station near Cromwell and he spent formative years on a small farm on the Crown Range. And since moving to Southland, he has visited Queenstown, Glenorchy and the Paradise Valley and other places in Central Otago regularly.

This exhibition of paintings on black paper primarily focuses upon the Lakes District. The works are expressive in character, imaginative in essence and utilise – as a stylistic convention – a woodcut technique of broad outlines. Brown makes no especial endeavour to be realistic but actively utilises source material such as maps; the locations, history and characters of gold mining; the physical structures, patterns and shadows of the alpine landscape and water.

The evocative place-specific dialogues develop the mythic nature of Brown’s narratives. These function just as much as incantations as characteristic visual devices. In works such as Shotover (2011), Our Otago Dreaming (2011), and Wakatipu – Central Otago (2011) the role performed by words is dynamic, innovative and dramatically varied.

Fundamental to Brown’s works is a humanist philosophy. Time and time again he has explored the connections and disjuncture between place and belief, between what we are and what we think we are. This is fully evidenced in the gold mining works of course but in the iconic Go Weep (2011) and Typical New Zealander (2010) he returns to his dominant concerns of identity and how we treat (and mistreat) our environment. In Love Aotearoa (2012), a work which radiates with light and is strongly suggestive of a stained glass window, he builds a powerful metaphor of love.