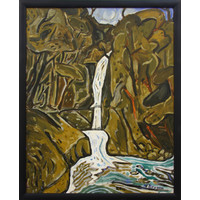 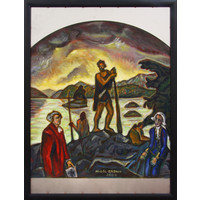 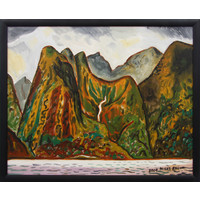 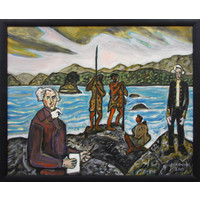 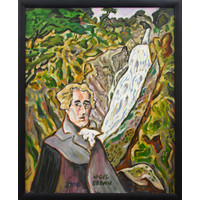 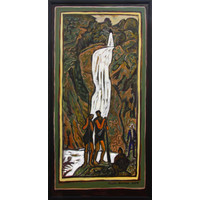 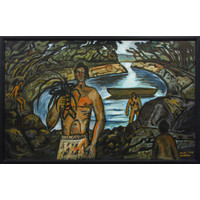 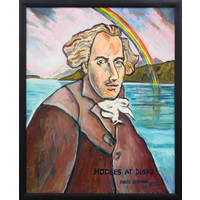 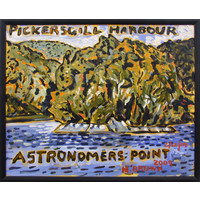 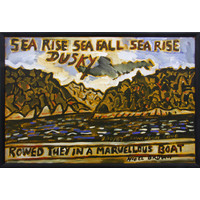 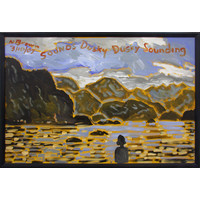 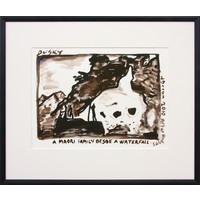 A Maori Family Beside a Waterfall (after Hodges) (2010)

The body of work in Nigel Brown’s Dusky Doubtful has its origins in a 2010 trip through Dusky and Doubtful Sounds, where Brown and four other artists were invited to re-visit the paintings and subjects of William Hodges, artist member of Cook’s second voyage to the Pacific. Speaking about his ongoing interest in Captain Cook, Brown comments that rather than historical fact, he is particularly interested in ‘myth making and the pursuit of ideas’, and his explorations of Cook over the past 15 years are a way of questioning national identity as well as examining how history is continually reinvented and restated. (1)

Images of bush-clad mountains and thundering waterfalls, as seen in Hodges’ Waterfall in Dusky Bay (1775) has been visited again and again by New Zealand artists and with paintings such as Maori Cascade and Cook and Hodges at Dusky Brown continues to work within this paradigm. While acknowledging the Romantic landscapes of Hodges, Brown reconfigures the subject matter and uses his distinct style to suit his own, contemporary, audience.

Using a rich palette of expressive brushstrokes, Brown’s Fiordland abounds with energy. In Maori Cascade the angularity of the fjord is described in confident lines of russet, gold and green. Heavy black verticals emphasize the strength of the terrain and are painted with a muscularity that fits the subject. Brown’s oft-used device of painted frames reinforce the fact that, while this work is part of a long lineage of landscape painting in New Zealand, he is creating his own myths for the land – stories within stories.

With Dusky Doubtful, Nigel Brown has created not only a collection of stunning new paintings but a collection of new histories. He encourages us to look, and then look again to find our own narratives in his works, taking his landscapes and making them our own.