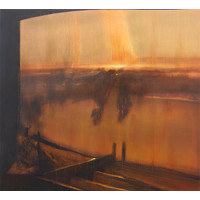 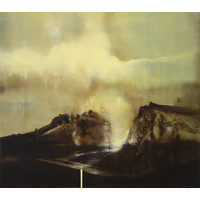 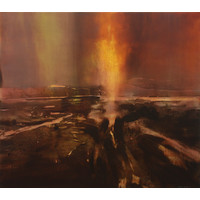 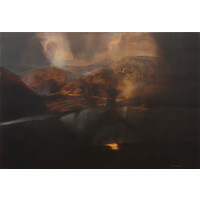 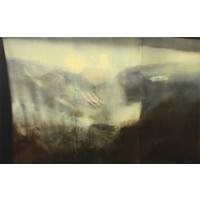 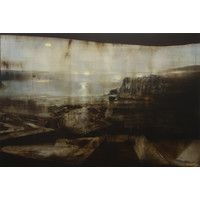 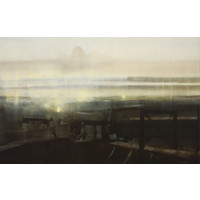 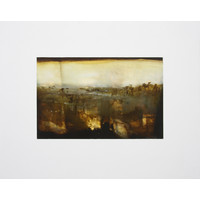 To suggest Garry Currin is a magician wielding paint is to touch lightly upon his unrivalled capacity to combine as one the notionally disparate. We see abstraction and (apparent) elements of photo-realism inextricably linked (Smoke and Dreaming, 2010). In other works, (Various Distances Apart I, 2008-10 and Fire at Ephesus II, 2010), architecture and atmosphere unite the linear and organic. Currin takes us to and then inside a world which is part-fiction, part-fact and out of this comes myth, event and the majesty of his considerable painterly accomplishments.

He references the past – the ancient Greek city of Ephesus and the site of the Temple of Artemis – by building sensations in his work to accompany pictorial information. In every work there is something coming or something has happened. He uses devices such as implied moving screens. He speaks of ruin and the travails of civilisation with stairs leading down and in, or by inserting the grid-like superstructure of an incomplete or destroyed building (Various Distances Apart I, 2008-10) and leaving this open to the elements it is part of.

Currin’s narrative language is metaphysical in character with the roles of darkness and light orchestrating how our eyes journey inside each work. He presents man’s presence and quests as endless spiritual journeys with the landscape as touchstone. Whether headlands, tidal flats, colonial landscape or intersecting mountains, Currin particularises the place and locates the viewer. Meditation on Orpheus III is imbued with the profound sense of being down on the beach itself. As the painting opens up out of the veiled background islands emerge and a suggested path of buttery light walks across the water to the viewer’s feet.