This Day, That Hour 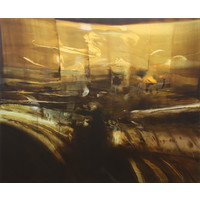 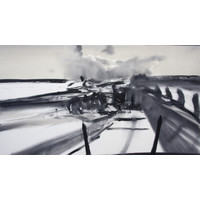 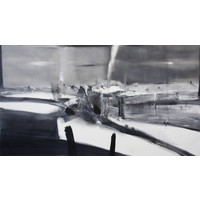 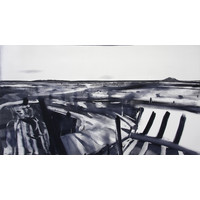 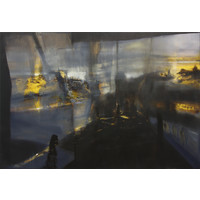 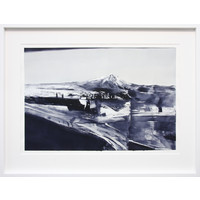 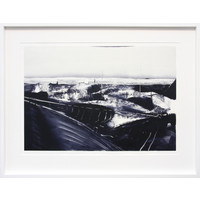 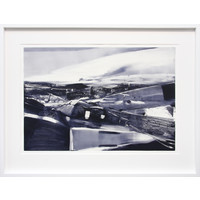 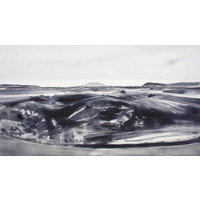 The works collected in Garry Currin’s latest exhibition This Day, That Hour exemplify the mastery that we have come to expect from the hand of this astonishing painter. Currin’s veiled landscapes are darkly radiant; they gleam with hidden riches. Rather than laying out familiar forms of land and sea and sky, the viewer must discover the works little by little, moving from one subtle signpost to another.

The splintered screen and molten golds of Takemitsu’s Garden provide multiple resting surfaces for the gaze. Flowing tone-on-tone colour seamlessly moves the eye from one section of the painting to another, each time allowing quiet contemplation of the work. Currin’s use of chiaroscuro does not create a harsh contrast but utilises blurred lines and soft, dark hues to suggest shrouded depths within the picture plane. Inspired by modern Japanese composer Toru Takemitsu, Currin says of this work that it is “an experience and a moment around [Takemitsu’s] enigmatic soundscapes.” (1) The tonal layering in Currin’s paintings is likewise enigmatic, giving only a little away to a casual glance, but rewarding the patient viewer.

Various Distances Apart, Kaipara uses a darker palette than Takemitsu’s Garden but Currin allows burnished gold and yellow to gleam through the mauve-greys and rich blacks that cloak the painting’s surface. Once again forms are indistinct – do we look out from a boat prow, a wharf, a headland? Subtle darkened edges in this, and other works, are reminiscent of a screen, a device which concurrently reinforces the two-dimensionality of the painting and prompts us to recall the depths that the artist creates on the picture plane. This paradoxical configuration underlines the exquisitely balanced tension and ambiguity inherent in all of Currin’s works.

From Currin’s Occupied Territory series, This Day, That Hour is described by the artist as “an instant in a moving landscape.” (2) Fluid brushwork dominates the centre of the painting, suggestive of a maelstrom or a vortex frozen in time and creating a discernible sense of unease. Visual relief is provided in a bleak, almost featureless sky and the still mountain form on the horizon. In many of his works, Currin carefully places visual markers to draw the eye and we see here a bright spot circled as if to indicate a starting point from which to proceed, a small island of calm amidst the swirling surface.

For the first time, we have on display works on paper from Currin and, in contrast to the paintings, their visual language speaks more directly. In Landscape without Len Lye, a 2008 work, Mt Taranaki is clearly defined and recognisable, even without the work’s title pointing the way. Working in monotones, Currin’s textured, painterly brushwork creates a brooding landscape in which the familiar mountain form becomes only a part of a larger, fractured, and uneasy environment.

A painting by Garry Currin is not a fixed mark, but a mutable entity; it varies with light, perspective, mood, allowing space for the viewer to bring themselves to the work. He evokes a land that is overlaid with a sense of the spiritual, but does so without bombast or agenda. Currin’s work is not for the impatient, but will reward with riches those with time to look, and then look again.