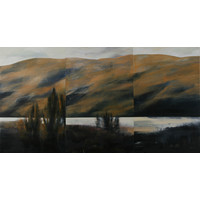 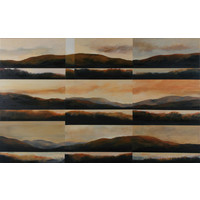 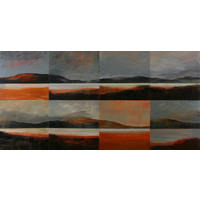 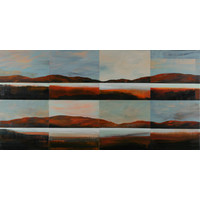 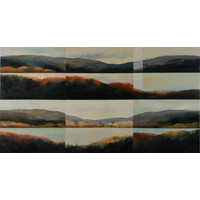 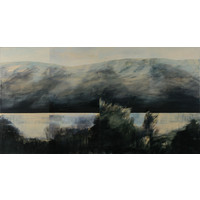 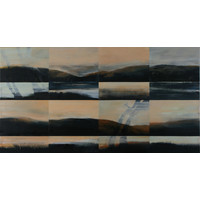 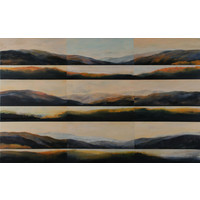 Second Sequence is a suite of ten new landscape works by Elizabeth Rees. Rees is “a substantial artist” (1) who openly employs abstract and representational painting techniques side by side, thus demonstrating (as numerous reviewers have remarked) her “great skill in handling paint.” (2)

Each of these paintings is episodic in character with location, time, day, multiple lines of sight, seasons, atmospheres and moods establishing ‘postcard’ vignettes and ‘felt’ mementoes which read as being partitioned, separate and discontinuous at first but then come to defy the apparent by coalescing into a unified ‘wholeness.’

Rees’ deft brushwork, the acclaimed command of light and shade, and use of implication, understatement and restriction in a seamless combination of abstracted blocks, fields, runs and washes of colour and suggestively “strong elements of place” is remarkable. (3) Although she has used the formal overlay of a painted grid structure for many years, Rees’ is now using it more overtly as a deliberate intervention in ‘how’ we are to ‘read’ what is ‘seen’ and ‘felt’.

She takes the landscape apart only to put it back together in ways which are (in places) logically incongruous and summarised but which come to have the authority of specific information, time and place. Each work has parts that variously fluctuate, assert and come forward while other areas recede. Rees ‘plays’ with brightness and hue – just as much as with construction – so that some areas come to have internal emphasis – a ‘mirror-like’ quality – and in this way other layers, presences, atmospheres and possibilities get added.

These paintings are complex and have broad dialogues but are deceptively simple at first. Musical rhythms are present, explicit seasons evident. The viewer comes to know this and to recognise the invented locations as the viewer’s memory rises up to assert presence thereby becoming actively involved in the ‘information’ of each painting. The feats of skill everywhere evident in this outstanding exhibition extend also to this process of how the viewer becomes such a key participant.