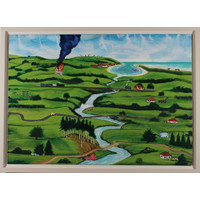 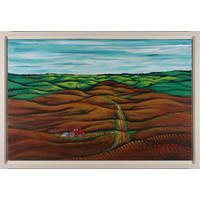 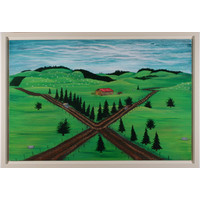 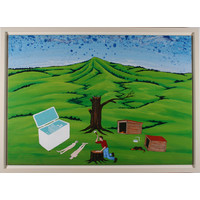 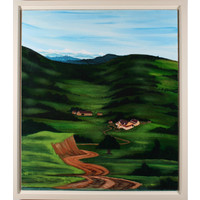 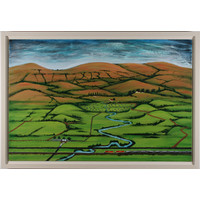 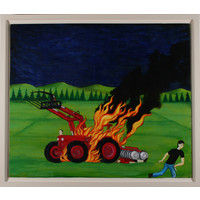 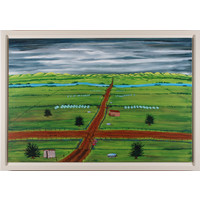 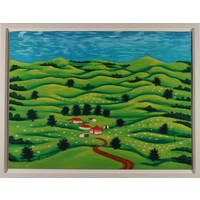 The Green Remembered Hills of Home (2002) 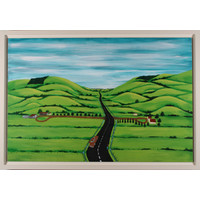 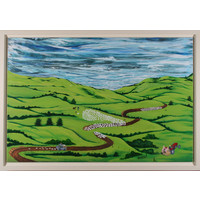 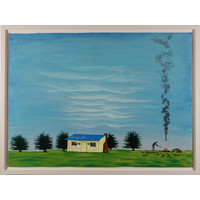 Tony Bishop’s paintings could be categorised as ‘outsider art’ but to do so would be to risk missing how ‘inside’ the New Zealand rural and social circumstance these works are. Equally, it would be just as easy to clothe his works with another convenient term of being ‘naïve’, the stylistic description used “to describe art works that have been created outside the boundaries of official culture” that “reflect unconventional ideas or concepts and depict elaborate fantasy words” using “vibrant, cheerful colours and a deceptively simple childlike style” but while apt, this too is insufficient because it is but a component, only a part of what is going on in his works and thus incomplete. (1) What may appear simple and stylised at first is in fact nothing of the sort.

There is a broad vision at work in these paintings of a rural paradise and of it being beset, besieged and dissolving from within. There is violence erupting, dream disrupted and truth being hidden. There are “themes of death, murder, hopelessness and poverty.” Events are depicted (Arse Up In The Ditch, 2007); the profound effects of substantial change closely observed (Dairy Conversion, 2007 and 600 Acres Of New Grass… 2007); idylls established (The Green Remembered Hills Of Home, 2002 and Winter Landscape, 2006); behaviours held up for examination (Mortality, 2005); sexual abuse, incest (Farm Manager Fucking His Sister… 2007) and phobia (Young Bogan Decapitates Old Homo Outside of Huntly, 2007) revealed. There is also another powerful underlay across all these paintings in Southern Gothic - Bishop’s dark humour (NZ Murders – The Board Game, 2006).

The narratives vary between something (often catastrophic) about to happen (Collision Course, 2007) or the cumulative aftermath of what has (Dog Tucker, 2007). A profound sense of unease – the dissonance of despair - permeates (underneath) these works yet this is so completely contrasted and contradicted at first by the predominant motif of fluid patterns, rhythms and repetitions, vertical and horizontal visual devices and the ‘self-apparent health’ of the landscape itself that the viewer ‘discovers’ the occurrence of the macabre last. Almost like an afterthought. How could any of this be happening – isn’t everything alright, here? Isn’t this Gods Own?

These paintings assert a sociological purpose as well as the vernacular and literary content of a story being told. Bishop makes his landscapes function as mirrors of what is going on and cannot be denied – he places us right in it.