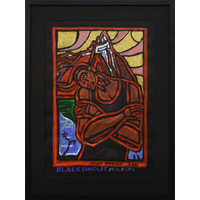 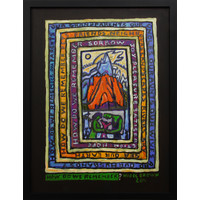 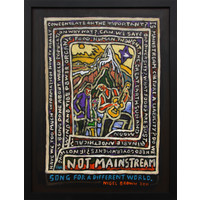 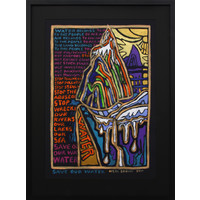 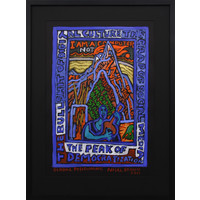 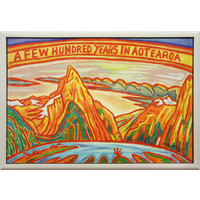 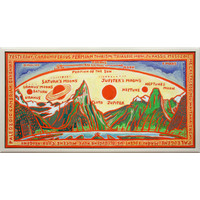 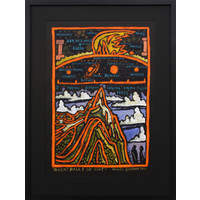 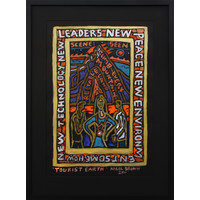 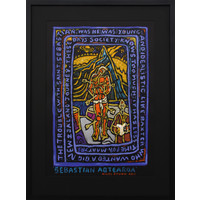 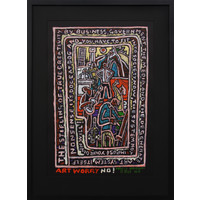 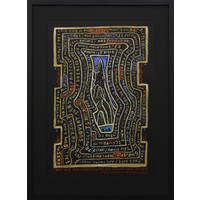 Nigel Brown is a painter of ideas. He has an acutely developed idiomatic ‘ear’ for the nuances of words and phrases, understanding that everyday use embodies the cultural and social dynamics of its time.

In Mitre Brown turns to Mitre Peak and addresses it as a touch-stone and as if it is a wailing-wall. At the same time, he uses it as a pluralistic and metaphoric symbol of human endeavour, intellectual thought and layered history. Around it, he circles words, using these like incantations and worry-beads. In layering down these ribbons of thought he encapsulates various resonant political and social dialogues which have immediacy and currency in our time. He subjects one of New Zealand’s tourism clichés and most enduring landscape symbols to the “tangents of subversive questioning” and the “colliding forces … of pathos, irony and humour and endless possibilities.”(1) In his characteristic way, Brown presents the wilderness landscape as inhabited - by people and memory, by expectation and demand, by self-interest and philosophical positioning, by tourism and the currency of financial imperialism.

A stylistic trend of heightened colour expressively used continues in Mitre and reaches a fuller flowering in the paintings such as Jupiter’s Moons, Naked in Fiordland, Ocean Deep: The Humpbacks and the John Buchanan influenced A Few Hundred Years where Brown openly pays homage to one of the first significant works of New Zealand art.

Great Balls of Fire (and Jupiter’s Moons) openly references a 1958 diagram of ‘planetary bodies compared with a portion of the sun’ (2) and images of a solar flare. These elements are used as stylistic and incremental motifs, varying scale and visual roles as demanded by the pictorial and narrative weighting, and in this way uniting the discursive narrative strands from one work to another.

This exhibition also emphasises the crucially innovative role works on paper has in Brown’s oeuvre and that it drives his practice forward. In My Film My Script and Do We Concentrate on Anything Now? the encircling text occupies the foreground, enclosing Mitre Peak in an accelerating rhythm of expressionistic outlines. Brown’s allusive use of dramatic devices such as curtaining and elements of the stage enable the works to traverse political issues (eg. Peak Demand or Global Positioning), humanist conundrums (eg Risk or Deeper Vision) and then to seamlessly link Aotearoa, James K. Baxter and Saint Sebastian (full of arrows at Ruatahuna) with Cezanne and the financial system (Might Collapse and Jittery). This subversive narrative brooks no fools and exempts none, including the art world the artist inhabits.