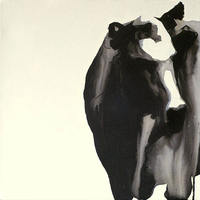 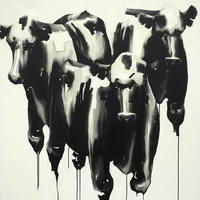 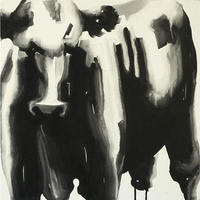 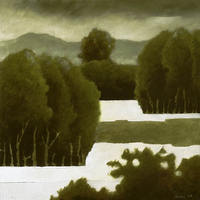 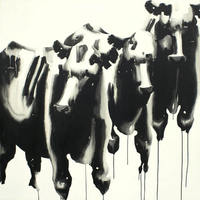 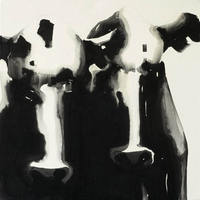 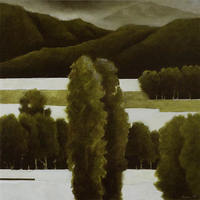 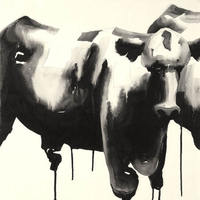 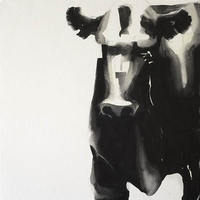 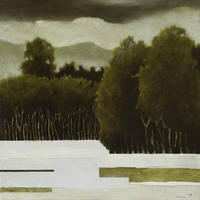 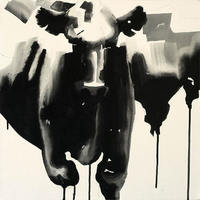 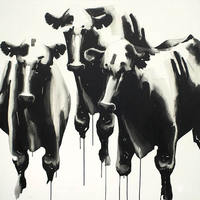 Mike Petre’s recent Field Study works posses an energetic presence. His unsentimental portrayals of cattle are intense compositions where rhythmic, gestural planes of black paint drip and run upon a stark pale canvas. These are illusory works where elements of abstraction and realism intertwine.

Petre “knows a great deal about these animals and makes the convincing images into lively, abstract patterns. The black pigment that drips and runs in rivulets where you would expect the legs of the steers is an effect Petre has made his own.
It conveys two realistic effects: that these kind of cattle are usually found in scrub or long grass and you do not see their legs anyway, and that cattle are often wet and drooling. The absence of eyes also makes the paintings more academically abstract.”(1)

Petre’s painterly language and knowledge of farm life extends to his Landscape series. He abstracts the land into broken fields of colour in monochromatic hues of deep green. As with his Field Study works, they are an observation of the tense periphery separating farmed land and native bush. “My technique develops from experiencing the environment,” states Petre. (2)

Petre’s authoritative landscapes are simple yet melancholy in tone. He examines the “confrontational edge to the vision of our landscape as picturesque or pastorale.”(3) Tension culminating in the overcast skies; the dark wet hills swathed in remnants of native bush are in stark contrast to the paler olive tones of farmed land in the valley below.

Petre’s works are more than merely descriptive, suggested or paraphrased; they are a pointed debate between the conflicting ideals of the manufactured industrial landscape and the organic rhythms of the natural environment. There is a clear link between Petre’s Landscape and Field Study paintings: “The reality of raising animals for slaughter and viewing the land for production necessitates objectification. My work is an attempt to capture this objectification, as well as negotiate ‘identity’ within the New Zealand landscape.”(4)