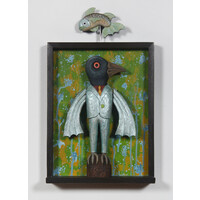 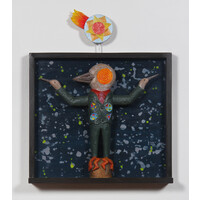 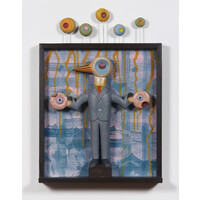 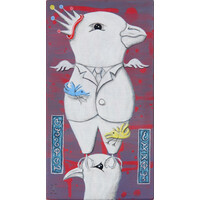 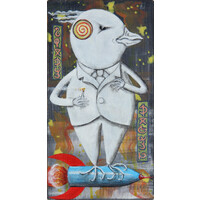 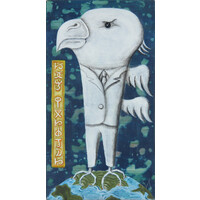 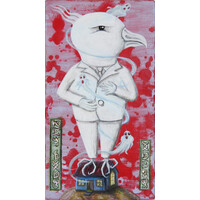 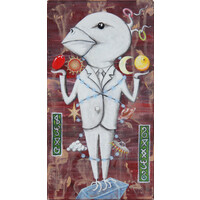 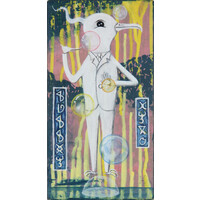 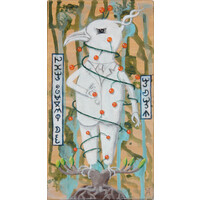 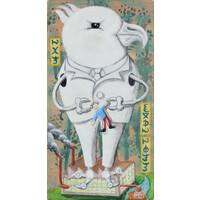 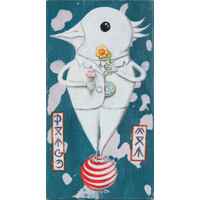 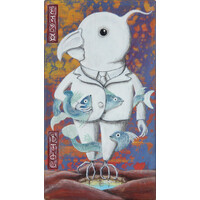 Like devotionals or religious icons, Harry Watson’s works use an established language of symbolism and form, but this idiosyncratic iconography is deliberately opaque. Currents of sunny naievete and menace flow through the works in equal measures; the bright colours a foil for darker ideas potentially lying under the surface.

Watson’s carved and painted works follow a uniform composition. The bird-men are variations on the same theme, with clean, defined outlines, and heads, beaks, bodies, and limbs that could have been assembled from a range of mix and match templates. They are like comic-book characters, a feeling heightened by the pop-bright motifs that accompany them. These devices range from flying saucers straight out of 50’s sci-fi to fish and fruits, and are unique to each painting.

The works possess an air of the carnivalesque, of “freak shows”, and fortune-tellings. The vertical characters on the painted works approximate runic script or alchemical symbols; tarot-like, they hint at divination or esoteric revelations for those able to unlock their meanings. Watson helpfully provides a key to the runic translation on the back of the works.

The artist’s Mi Birds perch, god-like, on pedestals that include a rocket, a factory, and the earth itself.  It is unclear however, if they are protectors or destroyers. Some fix us with a baleful gaze, while others pose with offerings and hands elegantly posed, bodhisattva-like. The artist’s use of such stylistic tropes, familiar from religious iconography, is disrupted through the introduction of motifs from disparate, secular sources. The effect is deliberately unnerving and prevents a simple reading of the artworks.

Harry Watson’s works encourage us to decipher puzzles, to find patterns, and to make connections. They also remind us that we might not always be comfortable with the truths discovered once the surface is scratched away.