サ-モアのうた (Sāmoa no uta)
A Song About Sāmoa - Fanua (Land)

Yuki Kihara talks to Vanessa about the 2nd phase of her サ-モアのうた (Sāmoa no uta) A Song About Sāmoa kimono project.
Video production: Ross Wilson

Throughout her practice, Yuki Kihara has interrogated the ways in which colonisation has shaped the cultural and socio-economic practices of present-day Sāmoa. In Fanua (Land), phase 2 of her kimono series, サ–モアのうた (Sāmoa no uta) A song about Sāmoa, Kihara confronts Sāmoa’s participation in a globalised system of neoliberal capitalism.

From the outset, it is essential to realise that fa’a- Sāmoa (Sāmoan culture and ways of knowing) of fanua comprises much more than the western concept of ‘land’. Fanua is inalienable from the personal and cultural histories of the Sāmoan people and concepts of ecological balance are intimately woven together with ties of kinship, notions of the sacred, and dialogue with ancestors and spirits (1). The visual narrative that runs across these five kimono however, presents a Pasifika nation complicit in ongoing environmental degradation that undermines and outweighs any economic gain.

Kihara’s images reveal the physical effects of an economic system that is intrinsically violent to people and place. Specific allusions are made to the stark dangers of man-made climate change, including the building of the new Vaisigano bridge in Apia as the old one was increasingly endangered by more frequent and more extreme weather events (2). Rising, turbulent waters sweep away traditional, colonial, and neo-colonial buildings alike, and the golden promises of the tourist economy have turned out to be hollow in a pandemic-stricken world. This is an “Aidscape”, a term coined by scholar Masami Tsujita of the National University of Samoa, and which describes how continued flows of foreign development fundamentally alter the physical and psychological landscape of aid recipient countries. (3)

As material objects, the kimono themselves embody the stress on traditional knowledge structures. The siapo cloth is made from lau u’a, the bark of the paper mulberry tree, groves of which are under threat from sea level rise (4).

The inclusion of the roosting bats in the kimono imagery provides a direct link to Kihara’s 2004 photographic series Vavau: Tales of Ancient Samoa, and reveals the consistent conceptual rigour of the artist’s practice. From this series, the work Tonumaipe'a; How She Was Saved by the Bats (2004) references the story of Leutogitupaitea, whose life was saved twice by pe’a (bats or flying foxes). It reinforces the themes of Fanua: humankind does not exist separately from nature, but is reliant upon and nurtured by it in a balanced relationship.

As well as recognising these mytho-histories, Kihara is also making specific reference to the theory that Covid-19 developed from zoonotic transmission of the virus from bats in a crowded Wuhan wet market. She sees this as a further example of the global impact of ongoing ecological degradation - be it due to climate change, over-population, or extractive and exploitative economic activities. (5)

The creation of Yuki Kihara’s siapo kimono is a collaborative act of story-telling encompassing indigenous knowledges and communal practices. It is also a clear and pointed warning of what could be lost to Samoa as it strives for a progress that is defined according to GDP and tourist dollars rather than regenerative practice and fa’a- Sāmoa.
1. Sa'iliemanu Lilomaiava-Doktor, “Oral Traditions, Cultural Significance of Storytelling, and Samoan Understandings of Place or Fanua,” Native American and Indigenous Studies, vol. 7, no. 1, 2020, pp. 121–151.
2. Dr Masami Tsujita, 2021.
3. Ibid.
4. Conversation with artist, October 2019.
5. Conversation with artist, March 2021. 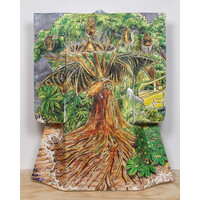 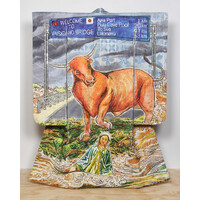 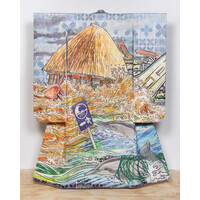 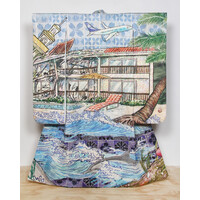 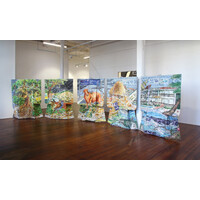 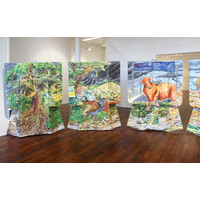 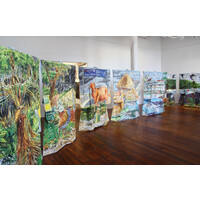 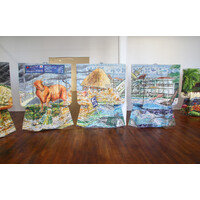 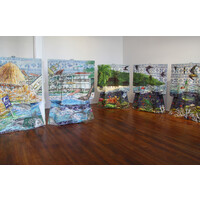 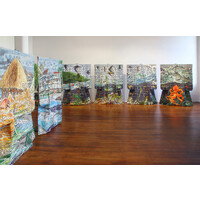 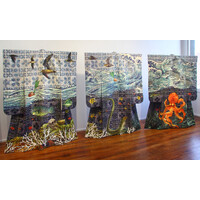 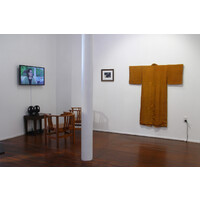