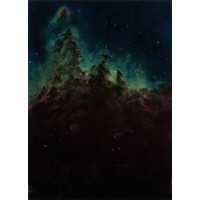 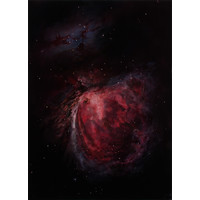 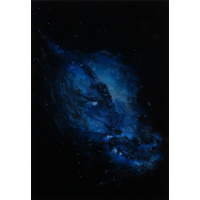 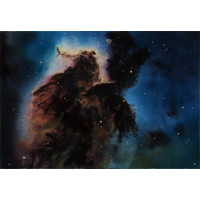 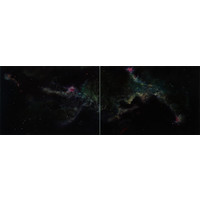 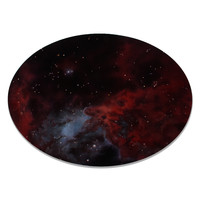 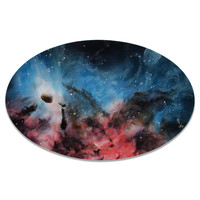 Hannah Beehre’s paintings can be read in the tradition of the Romantic sublime – a terrible beauty through which humankind could transcend the boundaries of the purely physical world and enter the realms of the metaphysical and spiritual. She confronts the viewer with the unknowable , inviting them to  witness an elegaic unfolding of time and space. Heart (Cusp) presents a towering mass of clouds that dwarfs stars and planets. Lit with a dark, infernal red, it hints at the violent energies of creation or destruction which operate on a scale beyond rational comprehension.

The unexpected, but not unfamiliar, nature of the medium plays upon the tensions between the emotional and the rational, the personal and the universal. At first glance, the painterliness of Beehre’s works creates the expectation of light playing across swirls of surface colour. Unlike traditional painting however, there is no clear delineation between the medium and its support. Dye pigments saturate the silk pile, rendering the picture plane permeable. In Seagull, the aurora-like clouds appear illuminated from within and move through the black void in a state of slow flux. The marbled colours are inseparable from their material and the dense black ground possesses a palpable presence.

Beehre’s subtle application of paint ‘floats’ on top of the pile and creates another layer of perspectival depth as she adds nimbuses around star-crystals or matte elements to the dull gleam of the silk. The direction of the pile alters perceptions of colour and depth, as the fibres catch the light according to the lie of the nap. What seems wholly black from front on morphs into shades of blue or magenta from a more acute viewing angle. The tactility and physical depth of the textile is intensified by the sculptural forms and refractive brilliance of Swarovski crystals. Multiple sizes cluster together in constellations or appear suspended at a great distance.

The visual fictions Hannah Beehre presents in Cosmogony are familiar to viewers from popular science publications and images of deep space gleaned from space probes and super telescopes. Her velvet paintings build upon these pre-existing visual memories and seek to extend them beyond the rational explanations of science. Beehre explores the immensity of what lies outside our ken and alternative ways to engage with that which we cannot comprehend. 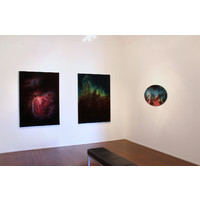 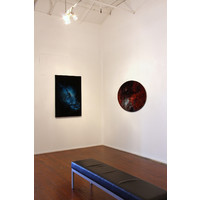 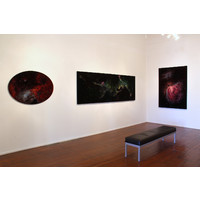 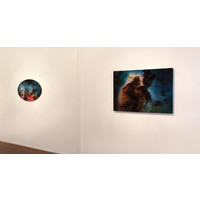