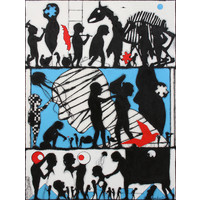 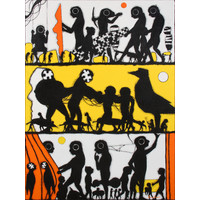 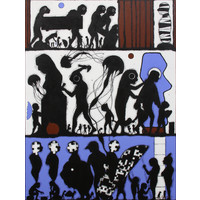 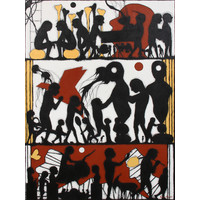 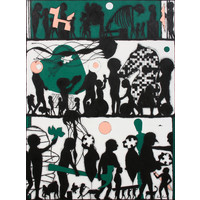 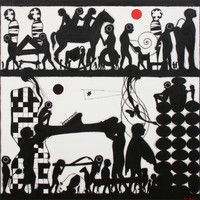 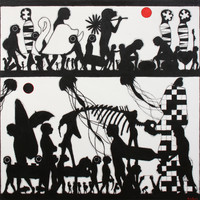 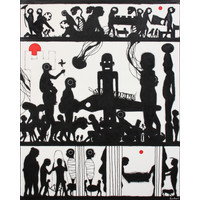 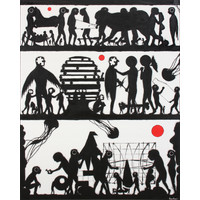 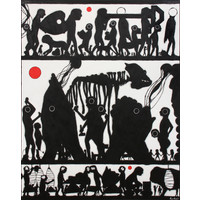 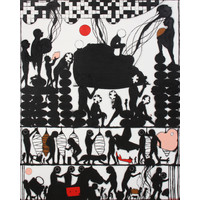 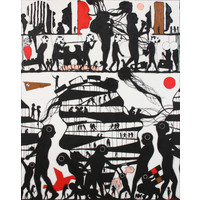 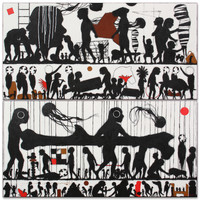 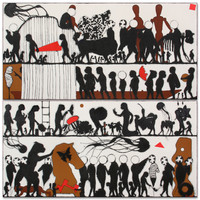 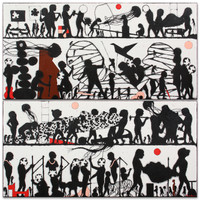 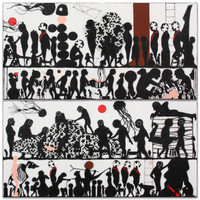 This body of work exemplifies the way in which Andy Leleisi’uao narrates stories within stories but does not provide a key to decode symbolic texts he uses. Meanings are concealed and their revelation requires the viewer to engage and consider the artworks on a number of levels. Leleisi’uao’s paintings raise more questions than give answers, but the reward comes in the process of exploring the many narrative paths the artist has laid.

Eschewing the bright colours that have been a feature of his works over the last few years, Leleisi’uao has returned to a restricted palette of predominantly black and white. Where it is used, colour acts as an intensifier that throws the subjects of the painting into starker relief. As the size of the artist’s canvases has increased, some of the inhabitants have grown in stature, giving their activities a greater sense of immediacy. A myriad other beings in all sizes still populate the multi-layered worlds, each performing a necessary activity, be it tending chrysalises, carrying tools, or communing with beast-creatures. Like shadow puppets however, only certain details can be discerned, with the remainder open to a multitude of interpretations.

As the eye ‘reads’ the canvases from left to right, the black-on-white figures recall pictogrammatic and hieroglyphic texts – but there is no Rosetta Stone to aid translation. In Utilitas People of Lemeads (2016) chequered areas have the appearance of crossword grids, but are clueless and out of context. Do certain beings hold in their heads the missing pieces of a puzzle or are they themselves incomplete and unfinished? Figures are in the process of being wrapped or unwrapped for reasons unknown; some possess a spindle-like outline reminiscient of de Chirico’s mannequins.

Despite these visual riddles, the overall sense in Leleisi’uao’s works is not of anarchic chaos, but of well-organised social structures underpinned by their own logic. Even the seemingly random elements of swooping jellyfish, butterflies, chess pieces, and origami creatures appear to have their ordained places in the communities of Lupotea or Ara’lupis or Phelantis. This leads to the realisation that that there is no single correct way to approach Andy Leleisi’uao’s painted language; it follows its own semiotic logic which alters according to that of the viewer.

From a metaphysical perspective, the silhouettes may be taken as intimations of the flickering shadows of Plato’s cave: simulacrums of the world that we accept as real, not realising that we have been fooled by shades. Do Leleisi’uao’s busy, collaborative, productive communities reflect reality or only what we believe (or wish?) reality to be? 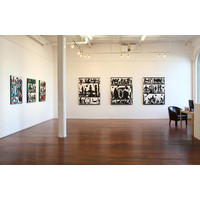 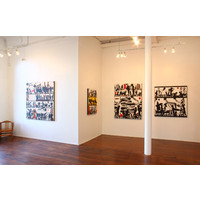 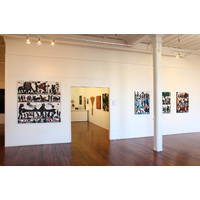 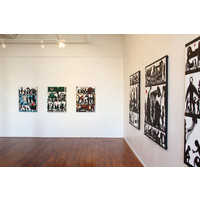 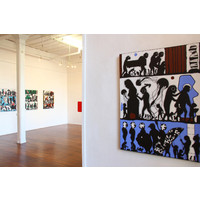 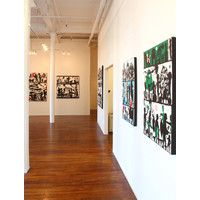