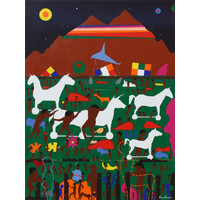 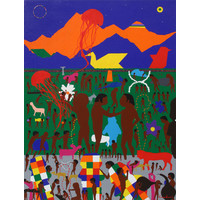 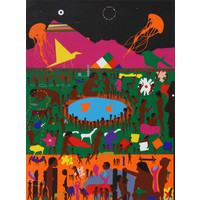 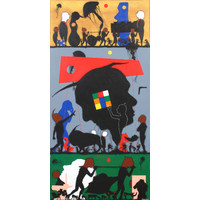 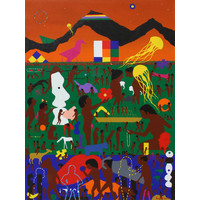 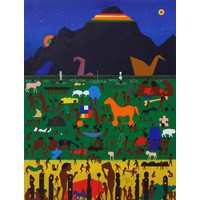 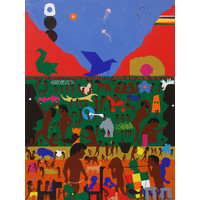 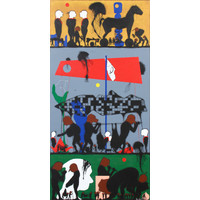 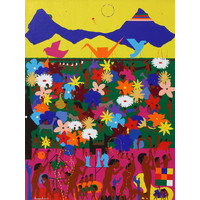 The paintings of Atmosphere People of Moana show a rainbow world through which Andy Leleisi’uao continues to explore the structures of community. Dozens of stories are played out on each canvas as the “atmosphere people” play, work, and rest together. Each singular moment contributes to the meta-narrative of social cohesion and communality, which binds the paintings of this exhibition together and establishes their place within Leleisi’uao’s larger oeuvre.

The dynamics of communal existence has been a long-standing thematic strand underpinning Andy Leleisi’uao’s practice. The inhabitants of his canvases are working towards a superordinate goal, to which the viewer is not yet privy. Leleisi’uao embeds messages within each painting using a symbolic language of form and motif and he issues an invitation to decipher them but does not provide a Rosetta Stone to assist with this task. This results in an intimate relation between viewer and work, as each bone, hand, or hidden face takes on a personal signification. The viewer enters into a hidden contract with the artist and is complicit in the creation and re-creation of the work each time it is viewed.

Andy Leleisi’uao has always played with scale to disrupt visual conventions and his painted figures do not comply with standard ideas of depth; they may be simultaneously large and distant, or small and nearby. Reflecting concepts of embracing and respecting difference within social continuities, the individuals Leleisi’uao paints subvert traditional concepts of dominance or subordination. They operate within a holistic system on mutual interdependence, irrespective of size or prominence. Like the chess or jigsaw pieces they juggle, each being has a place in the world.

The horizontal layering seen in many of Leleisi’uao’s earlier works has been modified in Atmosphere People of Moana; it operates in these works as a perspectival as well as a framing device. The angular mountain forms and suggested horizons create strong spatial boundaries that increase the depth of the picture plane. From the tree-line at the foot of the mountains a plain spills forth that serves as a stage upon which the activities of the people take place. The two-dimensionality of the mountains suggest the sliding set backdrops of the theatre, as do the giant origami bird-forms, whose geometries mimic those of the mountains behind, but whose struts and trusses reveal their deliberate construction. Flattened and shallow, the picture plane/plain reinforces the proximity of each individual to one another and the subtle relationships that knit them together.

The bold colours Leleisi’uao has chosen contribute to the theatricality and celebratory nature of the scenes. The contrast of hue, line and shape enhances the dynamic energy of each painting as the eye is drawn first to one scene and then another. The weightless jellyfish floating over and above the stage in Atmosphere People of Lano show how the artist deftly combines organic and geometric forms to build an internal narrative structure within each painting. Their trailing tentacles subtly direct the gaze to the clear blue of the central pool, which acts as a visual foil for the towering, rainbow-topped peaks beyond. Through this act of looking, the viewer is implicated in the communal ritual of the inhabitants as they gather on the shore.

Andy Leleisi’uao has created a theatre of community on his canvases and the Atmosphere People of Moana embodies notions of mutual respect, collective endeavour, and creative energy. Drawing upon a complex language of metaphor and sign, Andy Leleisi’uao’s paintings are rich with personalised narratives that are within reach of every individual who takes time to unravel them. 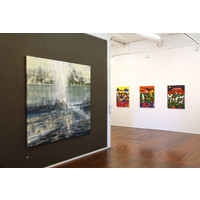 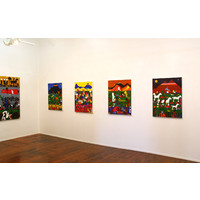 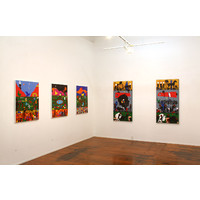