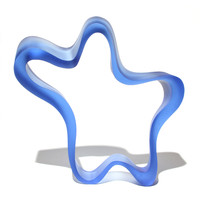 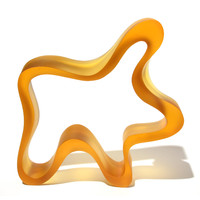 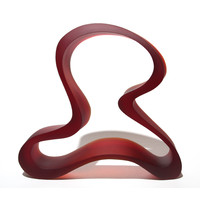 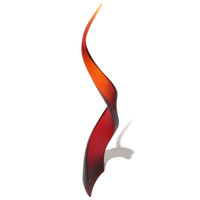 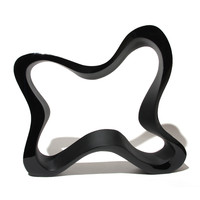 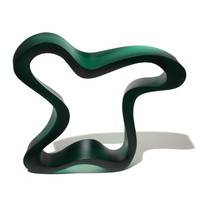 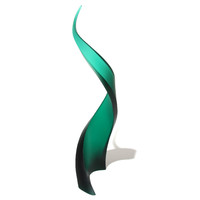 Christine Cathie has become a nationally significant glass artist. Central to her technique and concerns is a dialogue about the properties of glass itself – tone, colour, thickness, edge, line, mass and surface. Equally important is her ability to present motion, play with form and to imbue work with narrative concerns which are feminine in character and philosophical in nature.

This exhibition of entirely new forms is titled Amorphisms. Although the word means a shapeless form, it is impossible to argue that this is so, for each of the five Amorphisms are contained shapes and akin to drawings in space. They have markedly distinct attributes and differing characters from work to work and with each colour change. They also move in space, and alter substance and presence in accordance with line of sight. Therefore the shapes morph and change. They attain a visual complexity through a medley of implied references, whether amoeba, starfish, doodle, abstracted human form and so on. There is an internal focus and energy in the contained space of each work, and in this way philosophical concerns emerge.

The new Tendril form is a considerable development of the preceding Ribbon series. These works twist, turn and reach up, and as the shape narrows the role played by glass and all its nuances is revealed.

Christine Cathie’s use of colour is tight and restricted. Her forms are certain and energised. Each work in Amorphisms may seem at first to be simple and have the quality of understatement but there is no doubt that complexity emerges and the works begin to alter as one looks.