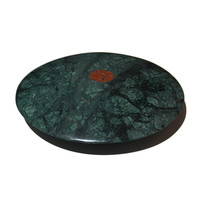 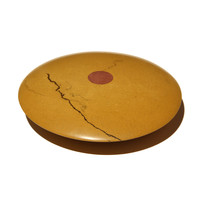 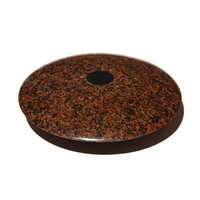 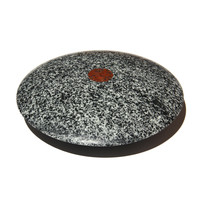 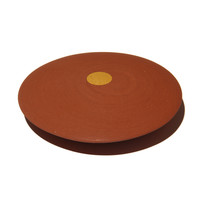 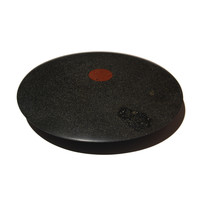 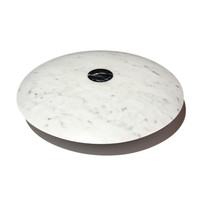 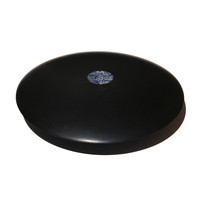 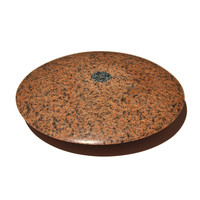 “The word “lens” comes from the Latin for lentil (Lens culinaris) and “lenticular” from the Latin lenticularis (“lentil-shaped)… In the past two years I have continued to explore this lenticular form, found in geological formations, clouds, nuts, seeds, optical lenses, and the discus.” (1)

John Edgar first developed the lens form after observing the Transit of Venus in 2012. Expanding on this original idea, the works in Orbit suggest the stately dance of celestial bodies throughout our own solar system. For many centuries, Western culture depicted earth and its place in the cosmos as a set of circles, each nesting inside another. Something of this can be seen in Edgar’s lenses, as each disc possesses a core that is at once part of and separate from the surrounding body.

Edgar brings to light the idiosyncrasies in the heart of each stone. The quartz-flecked, Bahia granite centre of Blue Moon glitters in the light, providing a lively contrast to the dense, rich black of the Shanxi granite surrounding it. Mirror images of one another, Solar Flare and Nucleus, celebrate the smooth texture of Indian sandstone.

Although obvious to the eye, the exquisite surface finish of each lens makes it impossible to feel where one type of stone changes to another. In a work like Blood Moon, where the inner veins of the stone are clearly visible, the silken touch of the surface belies its intricate crystalline interior, creating a pleasing disconnect between the senses.

Each lens work when displayed is lifted off the surface by a rubber ring support. This enables the top, underside and edges to be viewed simultaneously and in that way each work has a noticeable “lightness of being” too that adds further complexity to its experience and presence.