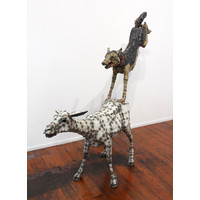 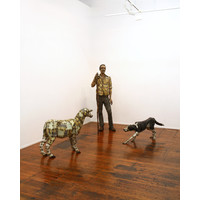 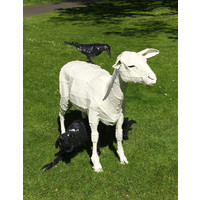 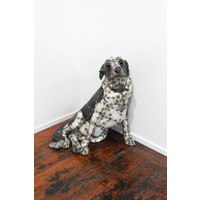 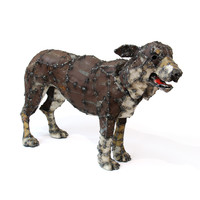 Hannah Kidd’s use of corrugated iron, a medium redolent of woolsheds and haybarns, perfectly matches her observations of working dogs and their charges in Under Dog. In Kidd’s hands, the roughened material takes on an organic, malleable appearance and brings her subjects to life.

Top Dog reveals Kidd’s unparalleled eye for capturing movement as well as her masterful technical skills. Caught in mid-leap with tongue and tail flapping, the huntaway is full of the joys of life and the startled ewe provides the perfect foil for his energy. Visually arresting, the perfectly balanced pair invites the viewer to construct the rest of the scene about them.

Designed to sit against a wall, Leaning Dog invites a pat on the head and the hard surface almost comes at a surprise. Kidd encapsulates the essence of each of her subjects so well that belief is easily suspended. The appeal of her sculptures is, in the first instance, their familiarity. This visual accessibility and tactility then taps into the viewer’s own memories – shearing time, a favourite pet, a day at the races - drawing out an emotional response to the works.

Whether exploring the New Zealand rural vernacular or the mating habits of exotic birds, it is Hannah Kidd’s ability to create a dialogue between her works and the viewer combined with her consummate sense of form and 'the moment' that singles her out as one of the country’s foremost young sculptors.