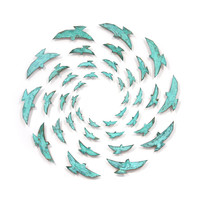 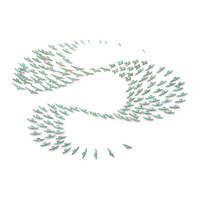 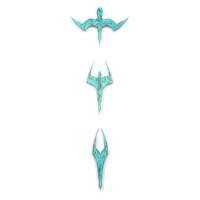 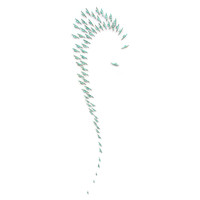 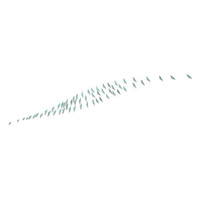 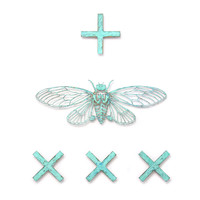 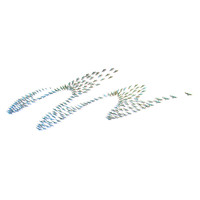 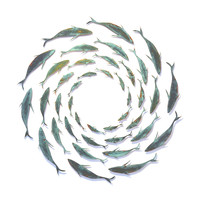 True to the title of the show, No Boundaries, Sally Smith’s delicate bronze sculptures float and swirl across walls, defying the traditional mass and solidity of their medium as well as the regular, defined wallspace.

Smith manipulates form, scale and surface to create space and movement in her flocks of birds and schools of fish, capturing them in the midst of their migrations. This manipulation extends outward from the works themselves as Smith incorporates the surrounding surfaces into each piece. Walls become sea or sky, and perspectives shift from near to far depending on the individual work. Smith’s illusions of space extend beyond the bronze figures she has formed - each work is more than the sum of its parts.

Environmental concerns are raised in works such as Only Here For Summer, which speaks to Smith’s experiences of viewing the annual return of kuaka (godwits): “Where I live on Waiheke we have a small group of kuaka who settle on the foreshore of Te Huruhi Bay over summer… Their arrival is always noted and my heart fills with admiration for these tiny birds and the massive journey they have taken to reach our shores.” (1)

Smith’s working of these small birds in bronze emphasises the strength employed in their migration across the globe while at the same time providing a vivid contrast with the actual physical fragility of the godwits and their endangered environments.

Time Immemorial also addresses issues of the transitory nature of time. Smith uses the cross in two forms – the single upright shape reminiscent of funerary symbols, the row of slanted crosses hinting at things that have been negated - ‘crossed out’. The delicate tracework of the butterfly /moth reminds the viewer of its precarious natural existence even as it is preserved in weighty bronze.

The weathered patina Smith employs in her sculptures works on both conceptual and visual levels. Traditionally patina develops on bronze as it is exposed to the elements over time and although Smith’s works are not yet physically old, they carry with them suggestions of the past and the future. As an aesthetic device, the green of the oxidised metal gives the individual forms texture and depth and draws the elements of each work together in a cohesive whole.

No Boundaries reveals Sally Smith’s superb craftsmanship, attention to detail and her fresh and invigorating use of an ancient medium. Each work stands on its own and together they form a conversation about the natural world and our place in it.