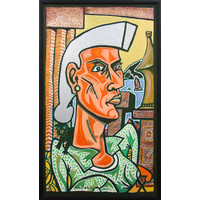 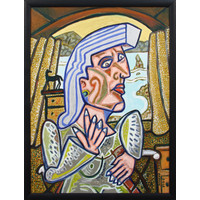 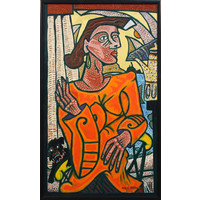 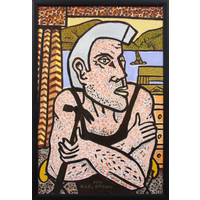 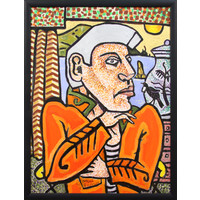 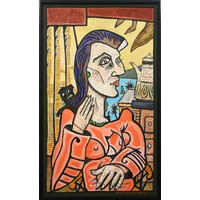 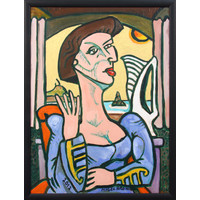 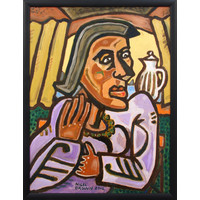 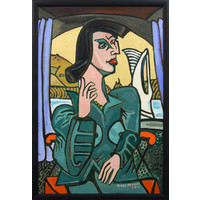 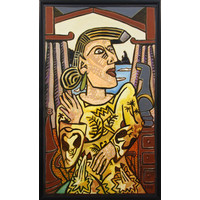 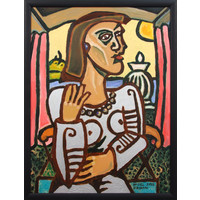 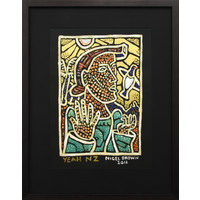 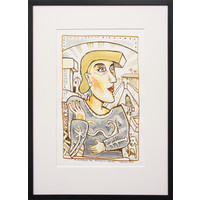 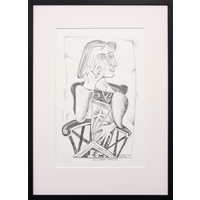 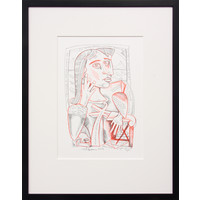 For his new suite of works, Invented Lives, Nigel Brown has taken as a starting point Picasso’s 1937 painting Portrait of Dora Maar. As the title of the exhibition suggests, Brown’s portraits are not of family, friends, or acquaintances; they depict individuals the artist has created from an amalgam of his own experiences, diverse visual styles, and re-figured memories. Portraiture seeks to define the ‘essence’ of the sitter that lies beneath their physical surface. With these paintings Brown turns this on its head: the essence of the person is already formed in Brown’s imagination and he must depict its physical manifestation.

Using the framework of Picasso’s Dora Maar as a template, with each character similar in pose and attitude, Brown uses their accoutrements, surroundings and names to ‘embody’ their personalities. Kiti Paua at Frame Point sports a pounamu earring and a dress covered in familiar Brown motifs of ponga ferns, cascades, kiwis and cabbage trees; Andrew Four By Two Riverton sees his quintessential ‘black singlet man’ with hammer in hand and beer crate on display. Names come from “family, pets, Southland place names, friends” (1) and Brown is aware that while each name has a specific personal resonance to him, each viewer will bring their own backstory when considering the portrait titles.

Brown’s approach to composition, use of colour and brushwork in this series of paintings also exhibit a diversity of sources. Of immediate note is Brown’s homage to Picasso and Cubism in his figures: faces encompass multiple views, and organic forms are simplified to basic shapes. Within this framework, the artist continues his exploration of Expressionist use of colour. The vivid orange hue of Vita Titikaveka Brickell is the most striking example of this. Accompanied by strong black outlines, sculpted contours and deliberate shading, Vita’s two-tone visage confronts the viewer. Susan Dreaming Tuatapere does the same; Brown’s dotted stippling is inspired by the textured "dabbing" he has seen in the works of desert artists (2), and is combined with the intense colouring of early 20th century painters such as Ernst Kirchner and Emil Nolde.

Drawing these threads together is the strongly identifiable hand of the artist and the recurrence of stylistic devices seen again and again throughout his practice. Brown’s gold backdrops suggest a spirituality to be found in the land and the extraordinary glimpsed in the prosaic; here they hover, halo-like, behind his subjects. The curtains Browns says "date back to my Titirangi period" (3) and the sweep of the Southland-inspired beach seen through the window create frames within the frame of the canvas, keeping in check the larger-than-life colours and energetic brushwork. Rather than the text seen in other suites of work, it is life’s trappings that define (confine?) these invented people.