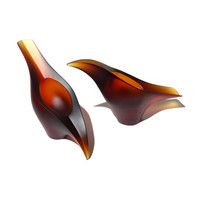 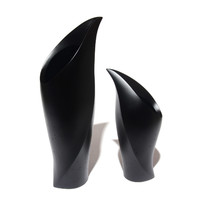 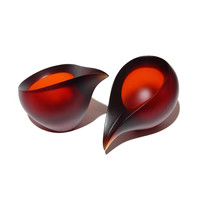 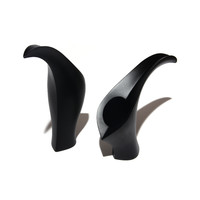 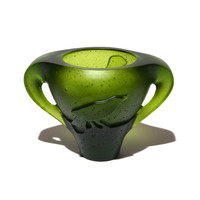 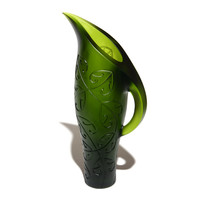 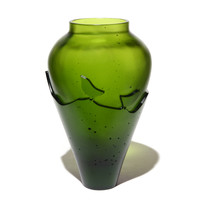 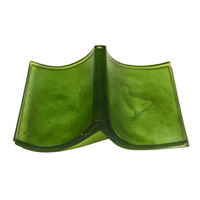 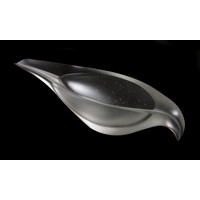 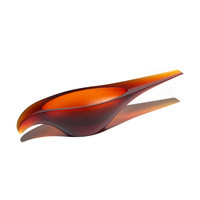 He has pioneered a formal language which is uniquely his own: his works are symbolic, abstracted forms with an ever-present figurative impulse.

He uses allusion, implication and key attributes of birds as narrative devices to underpin the primacy of form and the significant role of a drawn or incised line. These establish and constitute the substance of his individual style and the unmistakable artistic character of his work.

The Bird Collector explicitly references Walter Buller’s complex and conflicted status as an author of one of the great ornithological books of New Zealand and as a bird collector who was directly involved in the extinction of some of our native birds. Crawford has also used “the nuances of J.G. Keuleman’s engravings”(1) in the development of his forms.

In works such as Tieke Pair (Kelp) (2012) and Koreke Pair (Red)(2012) Crawford explores the male and female form, abstracting the neck and beak and the expanding shape to suggest both wings and body, while at the same time it is also and essentially a vessel with handles.

Crawford’s masterful use of implication is especially evident in the tall and slender Matuku Moana (2013) where the increased scale has allowed him to play with the cantilever weighting and to introduce sensations of “imbalance in this long-necked, long-legged bird”.

Crawford’s works are very elegant and have a fully-realised stature. In the new form Hoiho (2012) we see “how the oily blackness of the acid etched glass” resonates “with the feathers of the bird.”(1) The fluid, rising line articulates and positions the body of the bird and the creased lip establishes its disposition.

Crawford is a maker of objects that reference history and place, too. The Stephens Island Urn (2012) carries the memory of place and event. It “depicts the well-known story of the Lighthouse Keeper’s cat – purported to have caused the extinction of the Stephens Island Wren.” (1) The Wren was also first described by Buller. Crawford’s use of this circumstance is poignantly allegorical, yet both restrained and incisive, being wonderfully delivered in the round tableaux.

The Kowhaiwhai Jug (2012) reflects Crawford’s Maori/European ancestry and continues his exploration of objects as containers (such as in the Waka Huia works). “This work alludes to the trade and collection of traditional Maori objects and the further appropriation of Maori motifs, patterns that were produced overseas around the turn of last century.” (1) His adaptation of a traditional carving relief pattern on a water jug further adds new dialogues into his work.