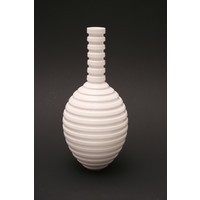 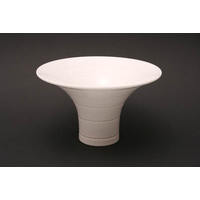 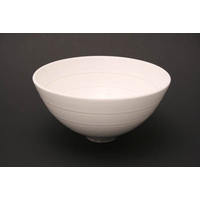 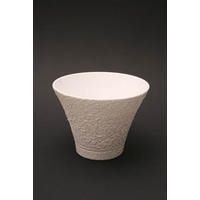 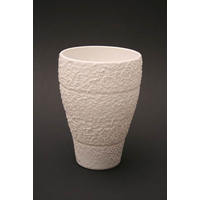 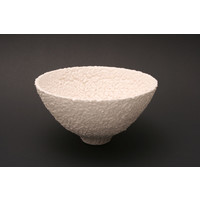 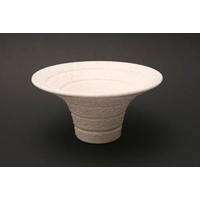 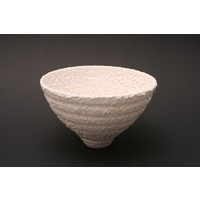 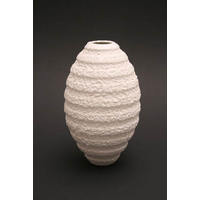 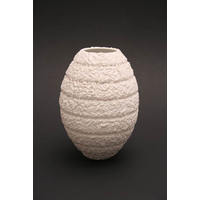 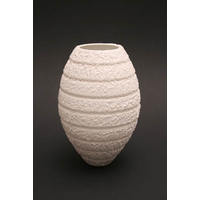 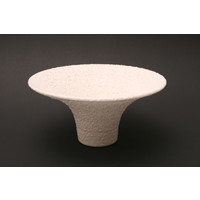 John Parker’s mastery of form is compellingly obvious. He is acknowledged as one of the few great artists of the ceramic medium in New Zealand. What is as remarkable as the self-evident skill of his craft is that his visual language has been tightly developed, argued and augmented through a process of on-going investigation and restraint.

His customary forms are well-established and familiar – bowls, vases, orbs, cylinders – upon which he has placed repetitive patterns of grooves or bands which are stacked in accordance with the rhythm of the form while at the same time becoming visual instruments themselves. This dialogue of form and linear motion (rhythm) reaches out to sculptural concern of the object sitting in space – the essential purity of shape, the neutrality of colour, the negative space established by and addressed outside.

Less immediately obvious but of paramount importance is how Parker uses the surfaces of his works to define and inflect. He has varied the use of matte and gloss glaze finishes throughout his career as a core mechanism to altering “how” the works operate in space – some soft, some reflective, others hard.

The intriguing development in this new body of work is that he has used the slurry of the making process as the last applied surface and in so doing has ‘allowed’ the pits and accumulations of additional texture to alter our perception of what is seen. There is a sense of the object being hidden underneath but equally he allows the under-surface, and the grooves and bands to emerge. In this way, Parker is using surface contradiction in a very literate manner – there is the ceramic art-joke of an applied craquelure through which the glaze becomes viewed and comes to assert itself.

The outcome is unmistakeably convincing and the works are simply beautiful. Parker’s mastery is such that any work can stand on its own while also benefiting from the company of other forms. We see in this important exhibition of New Ceramic Forms John Parker adding another considerable dialogue to his well-developed, critically acclaimed visual language.
All images and text copyright © 2022 the Artists & Milford House Ltd.