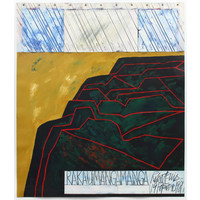 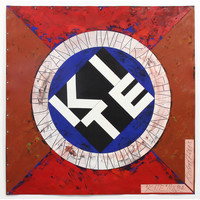 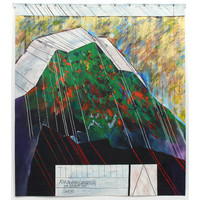 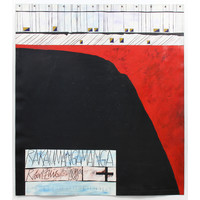 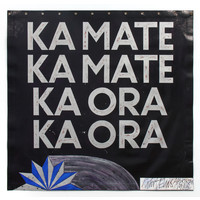 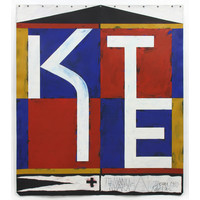 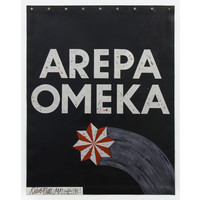 This collection of paintings from Robert Ellis is imbued with the concept of tūrangawaewae - a deep connection with land which is both spiritual and physical. Ellis weaves together threads from his own sense of place and history with those drawn from his wife’s Ngāpuhi/Ngāti Porou heritage. The rich visual and symbolic languages of his paintings translate into complex works of art with subtle layers of meaning to explore.

The elasticity of verbal language is used to ‘hide in plain sight’ multiple cultural meanings in the earliest paintings of this series. KITE, Noema 1980 and Te Manu Whara Tihema 1980 both exhort the viewer to search, to discover (kite). The word takes centre stage in the paintings, each of which is divided up into simple geometrical shapes reminiscent of banners or signage. It is testament to the artist’s appreciation of language and tikanga, that manu whara (literally: ‘wounded bird’) also denotes a sacred kite flown by tohunga for purposes of divination and communication with the gods. (1) Ellis acknowledges the different pathways to knowledge and does not privilege one over another.

The Rakaumangamanga works are named for the maunga (mountain) they represent and to which Ellis is personally linked through his wife Elizabeth’s ancestral ties. Replete with symbolism, they address a particular time in history:

“I was part of the landscape at that time when the land was being subdivided and sold with great conflicts between the local council and Maori shareholders of the land.” (2)

“when people got in by road... suddenly all these fences went up ‘this is my land, that’s yours'... people were squaring it up and finding out who owned what...” (3)

Ellis is always conscious of the complexity of settlements and histories, myths and legends that is connected to a certain place. This can be seen in the layering of colour and pattern in the surface of his works where symbols lie atop an older, painted ‘history’. In Rakaumangamanga 19 Pepuere 1981 the stepped bulk of the mountain’s profile dominates the canvas and Ellis uses strong red lines to cut through the rich black-green of the hill, suggesting roads, surveying lines, and topographical maps. Thinly slanted shapes at the top of the painting contain barely legible numbers and may be interpreted as potential parcels of land. Muted glints can be spied in the textured paint and Ellis notes:

“I was using metallic colours - gold silver, copper and bronze – to extend the colour vocabulary, and hybrids of these produced quite distinctive, unique colours and extended the painting range. This was one of the characteristics of my paintings at the time.” (4)

Like contemporaries Colin McCahon and Ralph Hotere, Robert Ellis was strongly aware of the role of the written word as sign and symbol. All three painters were concerned with issues of land, spirituality, and biculturalism, although approached them in very different manners. As with McCahon and Hotere, Ellis integrated text into his paintings using his own, idiosyncratic typeface but unlike them uses words as signposts rather than personal exhortation. In Kite Noema 1980 and Te Manu Whara, Tihema 1980 the block capitals are an intrinsic part of the composition of the paintings, acting initially as a graphic element and then as a symbolic one. The words become emblems, balancing form and meaning equally. The opening lines of Te Rauparaha’s famous haka dominate the canvas in Aperira 1983 and the clean lines of the white-on-black lettering brings to mind road signs of the time. Ellis lays the text before the viewer, sets the visual and cultural parameters, and leaves viewers to read the signs as they wish.

The text becomes both the message and the medium in Arepa Omeka, Maehe 1983. ‘Arepa’ and ‘Omeka’ are deliberate references to Rātana, but also sit firmly within a Western historical context that goes back to Ancient Greece and this cultural ambiguity intent allows for a broad interpretation of the work. Using minimal colour, Ellis pares the painting back to its essentials. The words appear to float above the dense black background and the stylised comet seems to have been drawn across the canvas, leaving trails in the painted surface. The tightly controlled outlines of both lettering and star are softened by the subtle texture of the paint within, and Ellis likewise disrupts the black ground of the painting with small spatters of white and red. Recalling the hand of the artist, these organic elements are the imperfections that serve to enhance the allure and power of the work as a whole.

Robert Ellis draws observations from personal as well as social perspectives to explore elements of New Zealand identities and the tangled histories contained in the land: geological, environmental, European, Māori, political, private. These narratives combine to create a deep, abiding, and spiritual sense of place in the paintings that make up ‘Land’. 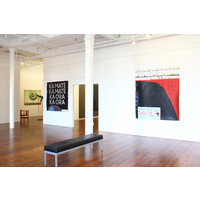 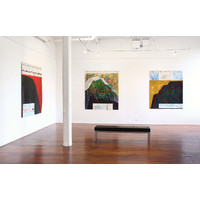 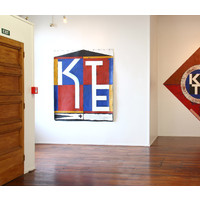 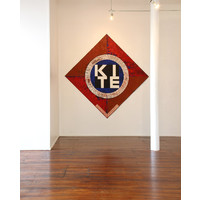 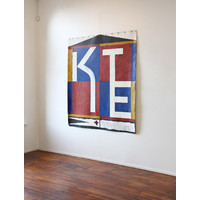 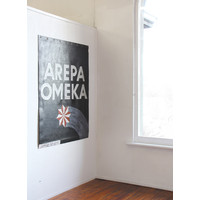 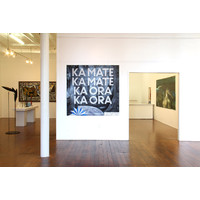 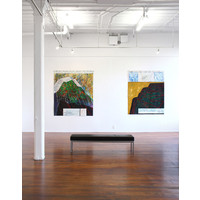