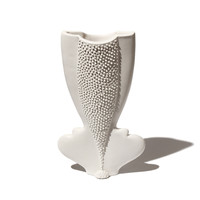 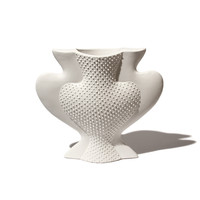 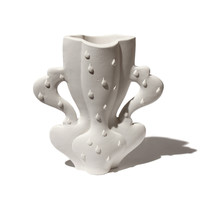 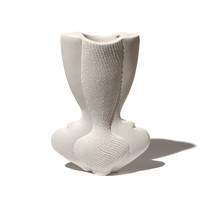 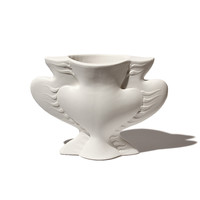 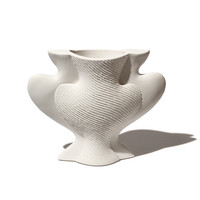 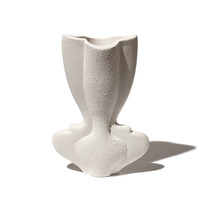 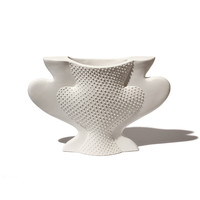 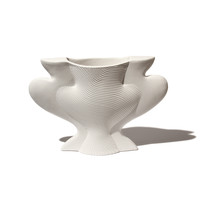 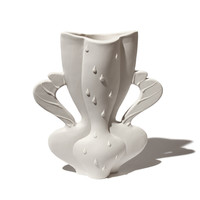 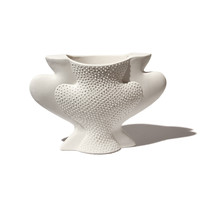 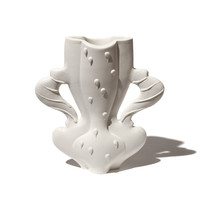 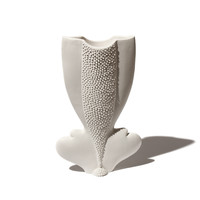 Flattened volume, a noticeably figurative impulse, the active utilisation of suggestion and shadow, coupled with the interplay of soft overlays and formal attachments come to establish the unmistakeable character of each work and the distinctive visual language present in Merilyn Wiseman’s Echo Vases.

These are works that inhabit the memory and which are imbued with resonances and echoes. There is a heart shape present and the rising forms of each vase are aspirational in nature. Her palette is the monochromatic tone of a frosty matt white glaze. In the teardrop surface treatments Wiseman allows the fluidity of the material to be revealed; repeated dots and lines assume quite formal, tactile presences.

Wiseman masterfully uses repetition, mirror-imaging, flattening space and volume and thus turns the three-dimensional form into predominantly front and back shapes. She is equally conscious of the mutating shadows on the works as those of the projected shadows of the works that go beyond the immediate space being occupied.

Arts Laureate Merilyn Wiseman is a singular figure in the field of New Zealand ceramics. The figurative, rhythmic disposition of her work is triumphant in nature and character. The Echo Vases attain the remarkable status of beauty and simplicity, while also being elevated by the memory and associations each viewer brings.