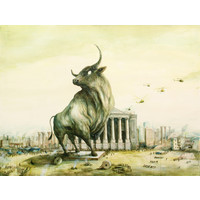 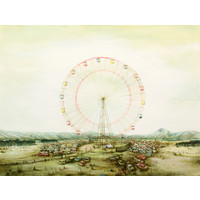 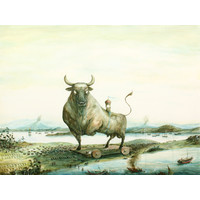 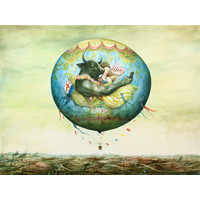 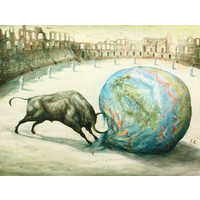 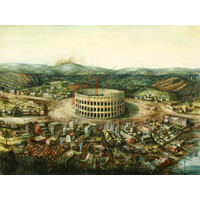 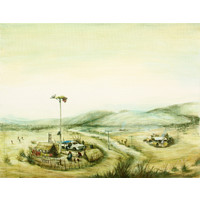 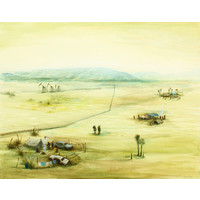 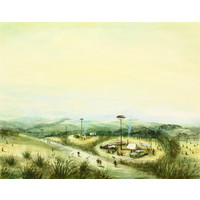 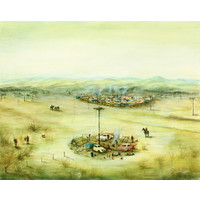 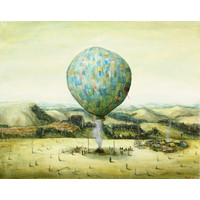 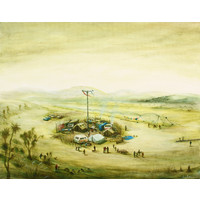 States of Emergency is a major body of work from Dunedin artist Jenna Packer and represents a significant development in her practice. She explores the political, economic and social constructs that shape contemporary society at both global and local levels. Using a rich, metaphoric language, Packer’s paintings confront the viewer with questions about the seen and unseen forces that control our day-to-day lives.

The artist adroitly conflates universal questions of privilege, entitlement, and power with intimate observations of humanity which remain strongly rooted in her own version of regionalism. Packer does not shy away from Otago-specific commentary, and issues surrounding fracking, mining, and de-forestation all rear their heads in States of Emergency. What raises this series far beyond a parochial discussion of current affairs is Packer’s consummate ability to relate these to a system that encompasses nation-states and governments, as well as municipalities and councils.

Central to States of Emergency is Packer’s appropriation of Merrill Lynch’s corporate logo, the bull. Immediately associated with power and aggression, Packer’s bull dominates the canvas. In The Ascension of The Bankers it is a hollow idol, blind to the populace over which it towers. Akin to the Trojan Horse of Greek mythology, it appears initially as a treasure of great price but proves false, providing only protection for those intent on pillage. It looms over the houses of government and the towers of industry and commerce, while its functionaries escape the chaos below. The ‘bull market’ has truly come to pass, complete with collateral damage.

Packer extends this metaphor to the idea of the bull ring or the circus in its original context – a place where stage-managed violence offers catharsis to the multitudes. Drawing its title from Roman satirist Juvenal (1), Bread and Circuses references the most famous circus of them all, the Coliseum, and also hints at the ill-fated Tower of Babel, a symbol of man’s vanitas. Packer’s outstanding skills of visual story-telling are seen in the way she integrates tiny scenes of the everyman into the overarching, meta-narrative of the painting.
In Bread and Circuses, all roads lead to the stadium and it is the obvious focal point of the work; look more closely however, and the small labours of the masses come into focus. Clustered around fires, sheltering under blue tarpaulins and lining up for soup kitchens, Packer is just as interested in telling the stories of how the ‘precariat’ continues its daily existence as she is in turning a critical gaze on the powermongers.

These paintings are an arresting combination of a strongly visualised concept illustrated with finely-honed techniques. Utilising techniques drawn from fresco painting, the layers of pigment and glaze give each work a luminous quality and the sepia tones Packer chooses reinforce the idea that she is documenting a history, albeit one that may yet come to pass.

Jenna Packer’s States of Emergency is a powerful commentary on New Zealand (and global) society, presented in the artist’s striking language of symbol and story. As in ‘The Emperor’s New Clothes’, she points, and dares us to see that the ruler is indeed naked.

1. Juvenal, Satire X, lines 10.56-89 “ The mob follows Fortuna and cares for nothing but bread and circuses.” http://en.wikipedia.org/wiki/Satires_of_Juvenal#Satire_X:_Wrong_Desire_is_ the_Source_ of_Suffering. Accessed 5/2/14