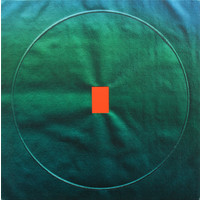 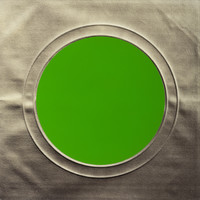 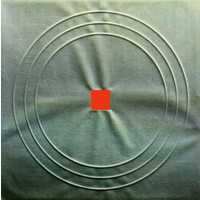 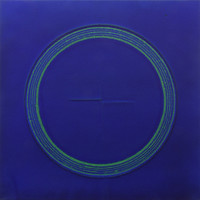 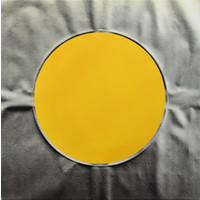 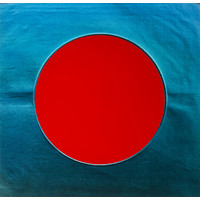 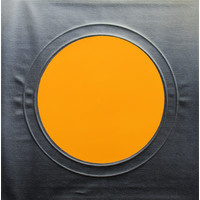 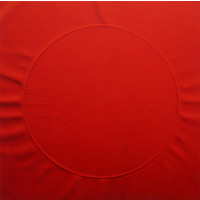 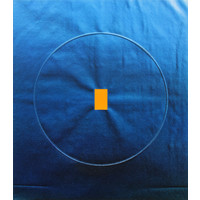 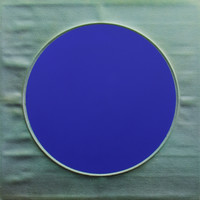 The reality of the painted surface, in which defined elements, textures and focal depth significantly alter, begins the viewer’s journey into the myriad of suggestions and deceptions which arise from Mervyn Williams’ remarkably distinctive paintings.

The paintings in Coloured-in are simultaneously ambiguous, resolute and uncompromising. There are high contrasts in colour and the role played by that varies from work to work with flat colour (contained) by circles and squares. These are surrounded by illusionary surfaces in which masterfully delivered tonal presences, transitions and chiaroscuro contrasts induce powerful perceptions and enigmatic sensations of three-dimensional forms on the two-dimensional surface of a painting.

The active process of what the viewer perceives and how this happens – with both mind and eyes and through intuitive feelings – has been one of the primary impulses in Williams’ career. This is not to suggest that Williams is content to let the viewer decide but rather he is acutely aware that there is a very significant inter-relationship between the act of making and the act of viewing. Williams uses devices such as repetition, visual rhythms, melodic structures, radiating patterns, pictorial segmentation and partial divisions to add complexity and substance to the optical experience. These counter-points exist around a variable centre in his works – sometimes recessive, sometimes flat.

He alters scale, includes painterly references and the language of process in an amalgam of opposites. There is a visible logic present that is beguiling and evocative but such notions of order and materiality are also revealed – ultimately - as a fiction.

The paintings of Coloured-in are evocative astonishments and visual paradoxes. They are enigmatic, visually-inspired experiences. These ten works constitute the last phase of the illusory works and present a transition to the digitally manipulated mixed media works. It is his ceaseless pursuit of originality which marks Mervyn Williams apart and absolutely identifies his work to be of international stature.

“Lost for Words”, a major survey publication of Mervyn Williams’ career, will be published by Ron Sang Publications in 2014. Contents: approximately 300 pages with 250 colour plates with essays by Dr. Edward Hanfling, Michael Dunn and Hamish Keith.
All images and text copyright © 2021 the Artists & Milford House Ltd.