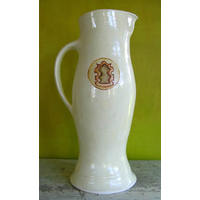 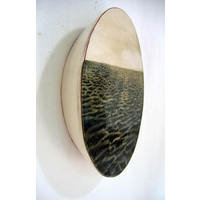 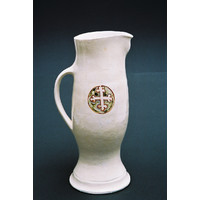 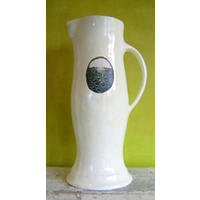 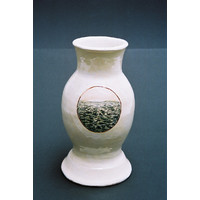 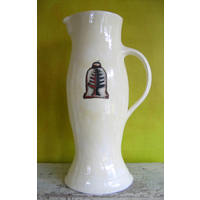 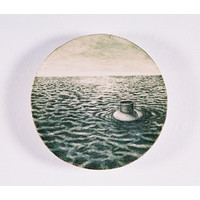 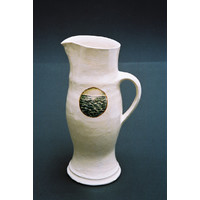 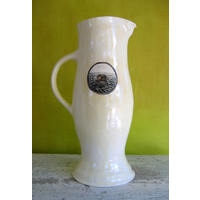 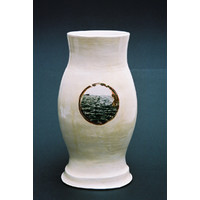 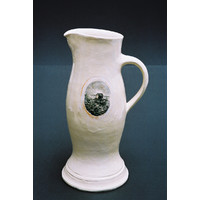 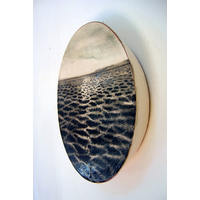 Leading ceramicist Christine Thacker has long had a fascination with the evolutionary path of ceramics. Along the old Silk Road to the very western shores of Europe, numerous cultural adaptations of the vessel form have developed. Inspired by the rough and often uneven form of the medieval jug produced for domestic use, Glossy Pitchers showcases Thacker’s trademark hand-coiled ceramic pitchers and jars, accompanied by a series of wall-hung tiles.

Throughout history, the jug or pitcher has been utilized as a ceremonial and religious symbol, as a means to represent social values or status and, of course, as a functional domestic vessel to carry and pour liquids. As Christine Thacker points out, “pottery jugs have been usurped by glass, plastic, even paper products these days but the form retains iconic status in the pottery domain.” (1)

Thacker’s work has a superb sense of form, mass and volume, and her painterly application possesses a subtle beauty. The glazed surface softens the edges, accentuating the fluid contours and mellow warm hues of each vessel. Her forms are often embellished with small medieval icons, runes and symbols that provide a sense of history.

In her latest series, Thacker explores her close relationship with the sea that surrounds her Waiheke Island home. Taking inspiration from Alan Curnow’s poem Sailing or Drowning, Thacker considers the “sea’s formless, shapeless, colourless and evocative character.” (2) As with many of her works, Thacker’s titles wittily apply a pun on the word picture/pitcher. Pitcher Of An Island, depicts a house on a small island surrounded by the rising sea, while in Pitcher of Light, she plays with the word “light” by painting an evening ocean view on one side of her jug and on the reverse, a flickering candle. The round tiles (Seven Seas) are reminiscent of the portholes of a ship, providing views of a whimsical seascape. The tiles are restrained, delicate evocations of the oceans ever-changing atmosphere, and if one strains the eye, faint landforms can be seen on the distant horizon.