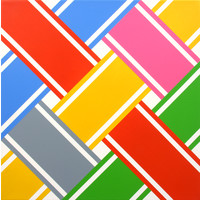 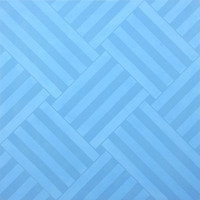 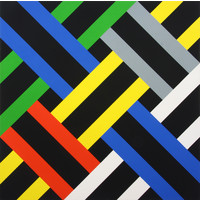 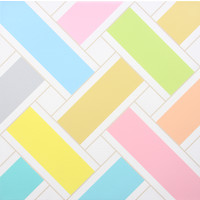 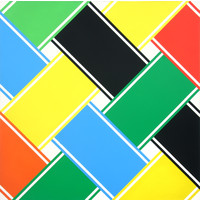 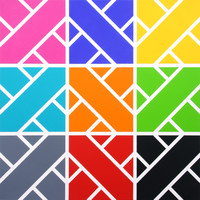 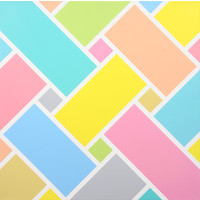 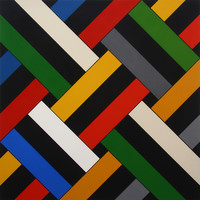 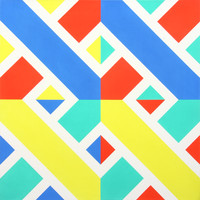 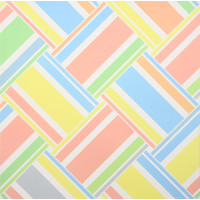 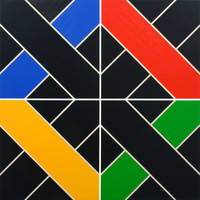 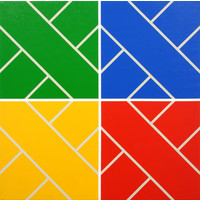 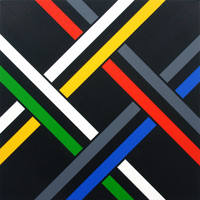 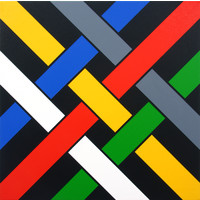 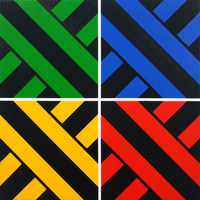 First exhibited in the late 1970s, Ian Scott’s Lattice paintings represent a comprehensive engagement with modernist concepts of surface, medium and abstraction. Scott’s concentration on fields of colour, the integrity of the picture plane and avoidance of ‘painterliness’ links these works to American abstract painters such as Kenneth Noland and Frank Stella.

While Scott was aware of and interested in these concepts, he was much more interested in finding his own way in which to explore them. In his essay Ian Scott: Lattices, Edward Hanfling suggests that Scott was “looking for a system that took on board the implications of their work without overlapping with it – a system that was unequivocally his… and could not be mistaken for anything else.” (1) Scott has continued to develop the Lattice works parallel to representational series such as ‘Painters’ and ‘Signwriting,’ indicating that the ideas he addresses with this body of work remain relevant and central to his painting practice.

The collection of paintings seen in this exhibition provides a comprehensive overview of Scott’s Lattice series. As a very early example from the series, Lattice No. 33 (1978) is of particular interest; the familiar over-and-under patterning can be seen in this work, but Scott experiments with the roles of the ground/figure. Scott has not separated the quadrants of the picture plane and colours abut one another directly. Dissolving any suggestion of illusory depth, the thick white lines Scott uses are figures in their own right, integrated into the ground rather than sitting atop it.

Colours on Black No 6 (Lattice No 65) is a classic example of Scott’s fully-developed latticed forms. The diagonal bands extend fully across the surface of the canvas; the illusion of them weaving over and underneath one another creates a tension between the actual two-dimensionality of the surface and the artificial suggestion of background depth (also suggested in the title). It is this inner tension that gives the paintings vibrancy, the sense of movement drawing the eye across the painting’s surface and into an illusory space behind the painted bands.

Ian Scott’s contribution to the development of an abstract language in New Zealand painting cannot be underestimated. With works in all major public galleries in the country, his sustained and continuing exploration of abstraction places him foremost amongst this country’s modernist painters while the breadth and depth of his art practice cement his place in any discussion of New Zealand art.