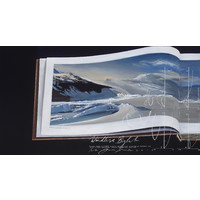 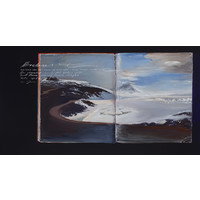 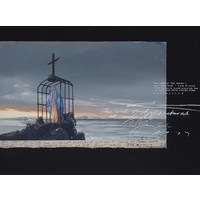 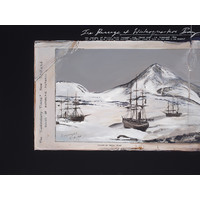 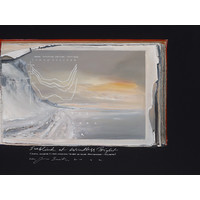 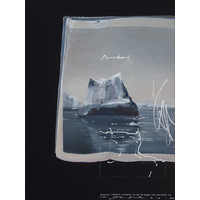 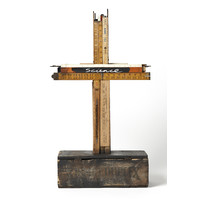 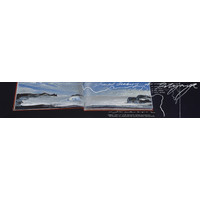 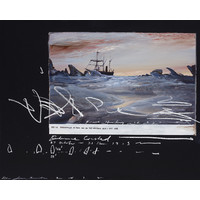 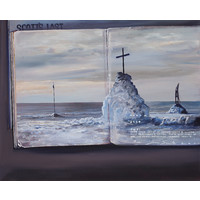 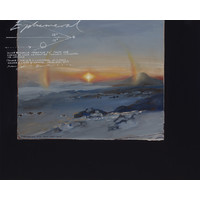 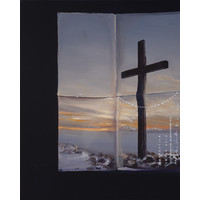 Peter James Smith’s exhibition Windless Bight consists of a series of works have their basis in his time spent in Antarctica as an Art Fellow. Stories of the continent have been reinterpreted and retold with Smith’s evocative landscapes framed within painted pages of notebooks, maps and postcards. His immediately recognisable overlays of scientific facts and texts provide additional points of reference to the works as well as provide tangible historical context for the paintings.

Thought of as overwhelming, vast and empty, it is the human narrative of the Antarctic that Smith addresses in many of these works. Man’s physical presence is indicated by the trappings of their explorations: skeletal ships and sleds figure as ghosts of explorations past. This sense of a tangible historical ‘text’ is evidenced further by the dog-eared and folded pages upon which the images are painted; the human hand is seen in the expressive gestural brushstrokes and hand-writing of the artist.

The name of the highest mountain on the Antarctic Continent, Erebus, comes from Ancient Greek mythology and is the personification of darkness as well as being synonymous with the underworld of the dead. This fits terribly with the mountain’s recent history as the name is now intrinsically linked with the tragedy of those killed in the 1979 crash of Air New Zealand Flight 901. Smith doesn’t place the mountain in the centre of his painting, but uses the sweep of the dark, dry mountainsides and the jagged teeth of ice floes to lead the viewer’s eye to the peak. His allusion to Hesiod’s description of Erebus reinforces the sense of threat and peril underlying the work.

Smith’s landscapes possess the elements of simultaneous beauty and terror that the Romantics called the sublime, the experience of which could bring about instances of spiritual transcendence. Hints of the spiritual run through these works, manifested through religious symbols, the otherworldly glow of the midnight sun or the secular monuments that invite reflection on lives past. Smith tempers this with the rational formulae, charts and diagrams that range across the surface of his paintings, providing parameters for the viewers’ experience. The sculptural piece Science encapsulates this: the rulers that comprise Smith’s Cross pay homage to empiricism, but stand atop a box written with Kismet – fate.