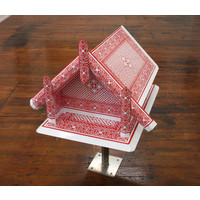 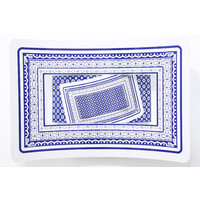 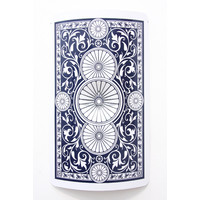 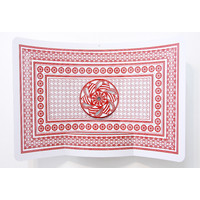 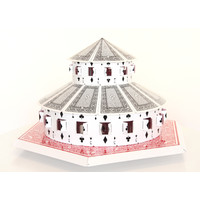 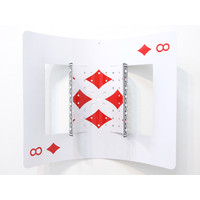 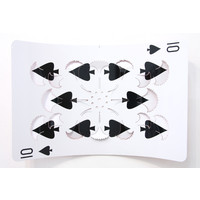 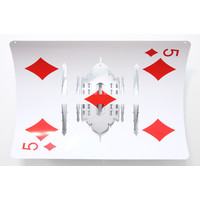 Every playing card has two sides – one reveals its number and suit, and with it there comes the implied language of that symbol, be it heart, spade, diamond or club; the other side is equally common and ubiquitous, being design and pattern, and in this manner comes to contain the broad social language of its sources and references.

The pack of cards in Dawson’s hands becomes a “house of cards.” Whare (edition of six) is a literal rendition of a Maori meeting house. In this, he has used pattern as a metaphor of carving and as an architectural device. This challenging, wondrous work builds a social narrative, traversing dialogues of culture, identity and place.

Rua’s Temple (edition of six) is equally literal and pays homage to one of the most memorable buildings ever constructed in New Zealand. Rua Kenena, the prophet (a forerunner of the Ringatu and Ratana religious and political movements) retreated with his followers to the Urewera’s and there built a meeting (council) house (called Hiona at Maungapohatu) in the round. Upon this were placed the symbols of cards. Dawson has taken this fact, and in a nod to the social documentary role performed by (black and white) photography at that time gives us a window into the aspiration and remarkable achievement that was Rua’s temple. The inside of this important work can be glimpsed through the windows and there revealed is a rhythm of black and red, side by side and stacked.

Dawson’s use of humour and contradiction is as equally fundamental in the single playing card works as is his characteristic play with space, perspective, and dimension and in so doing to release shape from pattern. He turns DECK: Ace of Spades into a devotional vanitas object where the spade floats in back space. In DECK: Ten of Spades he has taken a Spanish card design and revealed – in a flourish – a layered array of floral trumpets. In DECK: Five of Diamonds out of the blue comes the Taj Mahal. In DECK: Nine of Clubs a blade spins from the centre. The DECK: Eight of Diamonds has a perforated surface and the centre has been rolled, and in this way hides and reveals the surface and underside.
Each of the works in DECK: Second Hand alters shape with every different viewing position. Like a card trick, nothing is as it first seems and each work can be readily hung back to front. Similarly the works can be displayed free-standing on a table or surface but when presented on the wall, shadow, angle and depth come to play an integral part in how we see and what we see.