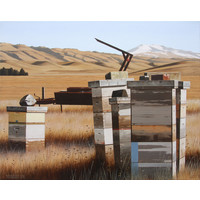 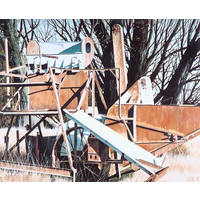 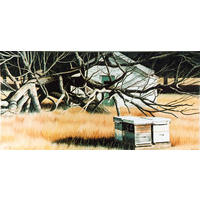 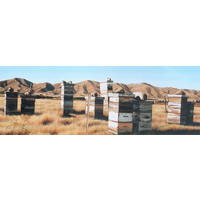 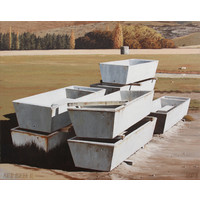 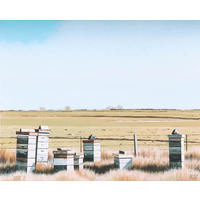 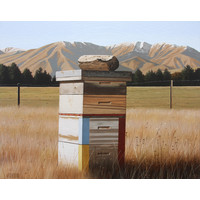 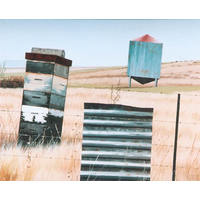 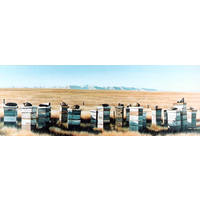 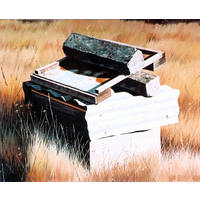 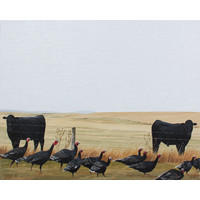 Michael Hight’s Taieri continues his debate of objects within the landscape. While his primary focus is still beehives, the view has shifted to include other rural fixtures such as farm machinery, buildings & troughs. The subject matter arose from a recent expedition on the Otago Rail Trail, a disused section of the former Otago Central Branch railway line that has been converted into a walkway and cycle path. Hight spent six days cycling through the landscapes of the Ida Valley, the Maniototo and Middlemarch gathering material for his new body of work.

“In addition to the numerous beehives in this area I was also struck by the dominating presence of the Taieri River. This gave me an opportunity to revive a project I planned over ten years ago. This involves travelling along various rivers making a visual record along the way.” (1)

Hight’s ability to authoritatively lead the viewer’s eye in and around a painting and capture the specifics of location is exceptional. His paintings articulate the precise details of location, season and time of day. These are autumnal vistas, the grass bleached to a golden honeyed hue, deciduous trees loosing the last of their leaves are silhouetted against pale washed out skies. The low lying light has enabled Hight to capture sharp dramatic shadows cast by objects on the landscape. Like archaeological relics the beehives in Waipiata and Kyeburn or the rocky outcrops of Paerau throw their elongated shadows across the Otago Plains.

There is an architectural grace to Hight’s compositions. Beehives, farm buildings, discarded machinery and livestock are dominant features, which impart a sculptural force within the landscape. Hight keenly observes the abstract qualities of these objects; rust patterns on a corrugated roof (Patearoa), an orderly stack of water troughs (Puketoi) or the weathered wooden surface of a hive take on a remarkable vitality.

Hight’s three series of small works depicting the landscape, hives and farming material address his wider concerns as an artist and are delivered with assurance and aplomb. However it is his large-scale iconic beehive paintings such as White Sow Valley, Wedderburn and Kyeburn that remain the substance of this show. These are outstanding paintings distinguished by the authority of the work and the accuracy of what Hight sees. There is a sense that Hight is using the distinctive language of place – he sees as an insider.