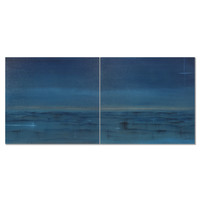 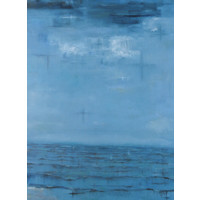 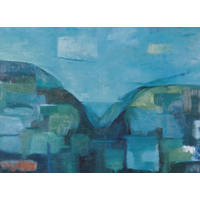 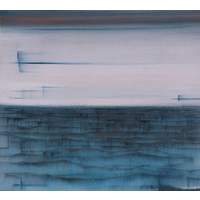 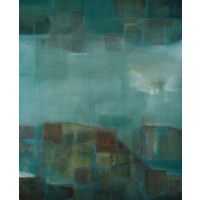 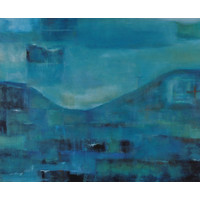 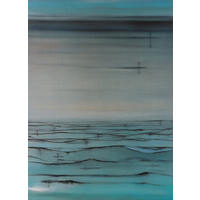 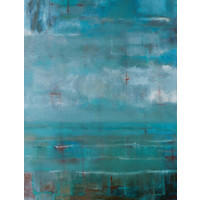 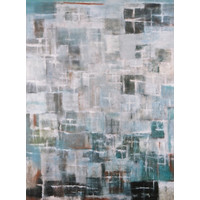 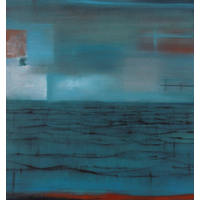 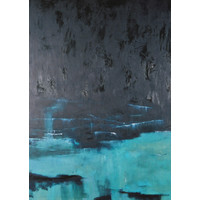 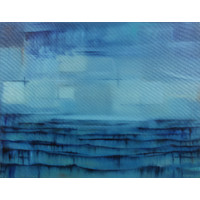 Charlotte Handy’s The Inland Sea explores “the tensions between abstract and literal, land and sea, surface and depth.” (1) The atmospheres established move between the realms of implied, real and imaginary while Handy dissolves perspective to play games with the viewer’s perception. Key in these paintings is the state of constant visual flux: nothing is fixed or certain or final.

Handy’s paintings are a non-representational visual cartography of oceans, landmass, and weather conditions where location is suggested rather than overtly stated.

The artist generates a search for places as meaning and delivers ambiguity. Just as the land and sea are interchangeable localities, the cross motif predominant throughout Handy’s paintings can be read as a symbol of faith, a navigational point, a ships mast. “A cross marks an edge a line twice drawn, a crease-mark on a map…the position of a star or sun on an astrolabe.” (2) It is also a visual device of emphasis.

Handy layers perspective to produce works with unique spatial qualities. She alters conventional pictorial constructs by establishing varied, multiple points of perspective with overlays of lines and colour, and cubes of light in tonal variance. Graduated bands of saturated blues are altered square-by-square, line-by-line to create a spatial tension between volume and surface. Thin lines are dragged across the canvas transforming into dark crosses or the lip of a wave advancing and retreating.

A lyrical rhythm and sense of the artist's hand moves through Handy’s works as she maps, defines and fractures the geography of her compositions, repeating and yet varying shape, tone and motif. Boundaries are precise yet intermingled; a rectangle of colour is scored with an intersecting margin line, the corner of which becomes a cross motif and so on.

Ambiguity of form, content, depth and meaning within Handy’s paintings are instruments of debate, while also being containers of cerebral beauty and moments held in suspension.